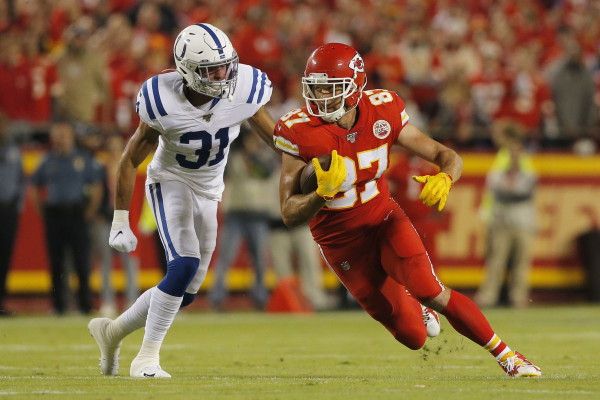 Thursday Night Football features an AFC West showdown when the Kansas City Chiefs (4-2) travel to Broncos Stadium at Mile High to take on the Denver Broncos (2-4). Andy Reid is trying to take his high-flying offense on the road on a short week to try to tackle the thin air of Denver. For the Broncos, coach Vic Fangio is trying to impose fear on opposing offenses with a defense that has certainly stepped it up over the last two weeks. One thing is for sure, on a short week, this could be anyone’s matchup. Kickoff for this one is scheduled for 8:20 pm ET.

The Chiefs find themselves in the midst of a two-game losing streak. After winning their first four games, they have now lost in back-to-back weeks to the Indianapolis Colts (19-13) and the Houston Texans last week (31-24). Still, behind the dynamic play of quarterback Patrick Mahomes, this is an offense built to win now and has high aspirations for a playoff run.

The Broncos are currently just the opposite of the Chiefs. They lost their first four games only to have won the last two against the Los Angeles Chargers (20-13) and last week over the Tennessee Titans (16-0). While the 2-4 record looks poor, this is a team that could easily have been 4-2, as they lost two heartbreakers on last-second field goals to both the Chicago Bears (16-14) and the Jacksonville Jaguars (26-24). For Denver, they look to get it done with an intimidating defense much more so than with their offense.

The Kansas City Chiefs come into this as three-point favorites despite playing on the road. The over/under for points scored is set at 48.5.

KC Hopes To Heal Up And Start Winning Again

For the Chiefs to consistently win, they rely on a high-octane offense that will try to outscore their opponents, oftentimes in shootouts. The problem as of recent, though, has been the health of that offense.

Mahomes is still a dynamic player, but he has been hobbled by an ankle injury, one that he hurt again last week in the loss to the Texans. On the season, he has gone 147 for 230 for 2,104 yards, 14 touchdowns and just a single interception. In six games, he has also been sacked just eight times.

Not only has Mahomes been limited by an ankle injury, but his offensive line has been hobbled, too. Both Eric Fisher and Andrew Wylie missed the game against Houston, and both are questionable for Thursday night. Given that Denver had seven sacks against the Titans last week, that could be an issue.

On the positive side, Sammy Watkins could be good to go for this one after missing last week. Watkins has 23 catches this season for 365 yards and three touchdowns. The leading receiver, though, is Travis Kelce. The big tight end has 32 catches for 497 yards and a touchdown.

On the ground, the Chiefs are led by LeSean McCoy. On the season, he has 48 rushes for 258 yards and two touchdowns.

Defense Hopes To Keep Offense In The Game

Fangio is known for his defensive prowess, and that is starting to shine in Denver. In the last two games, they have allowed just 13 points, and they have yet to have a team score 30 or more against them. This is a defense that is led by Von Miller and can be as intimidating up front as they get.

In addition to the seven sacks last week, the Broncos made life uncomfortable for the quarterback all day and forced three interceptions. The leading stat getters thus far are DeMarcus Walker (three sacks) and Justin Simmons (30 tackles and two interceptions).

While the defense has excelled, the offense has struggled a bit. Joe Flacco is leading the Broncos under center and has gone 130 for 196 thus far with six touchdowns and five interceptions. He has also been sacked 15 times thus far.

On the ground, Phillip Lindsay and Royce Freeman have led the way. Lindsay has rushed 84 times for 397 yards and four touchdowns while Freeman has rushed 66 times for 284 yards. The Broncos hope their 1-2 punch can find success against a weaker Chiefs defense and, more importantly, keep Mahomes off the field.

This one was really tough for me to decide on. On paper, this would be Kansas City all day for me, but it became a tough decision when you take everything into account. Mahomes is hobbled, and even if the offensive line is a full go, I am not sure they will be 100 percent. That makes life pretty tough when you take into account the pressure Denver’s defense can put on a quarterback.

It really boils down to a good offense (Chiefs) vs. a good defense (Broncos) on one side of the ball only to have an awful offense (Broncos) vs. an awful defense (Chiefs) on the other side. If the Broncos can get the run game going, though, I think they are capable of upsetting their divisional rivals, especially at home in the thin air and on the short week. It is a bit of gamble, but I am taking Denver and the three points.