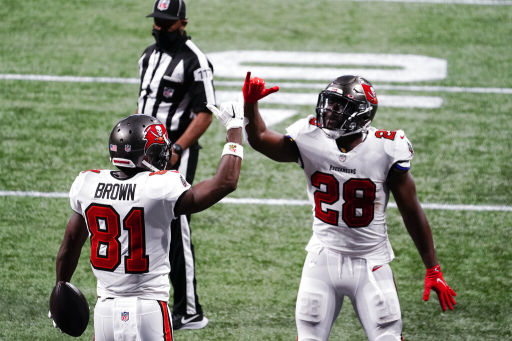 On Boxing Day, the Tampa Bay Buccaneers (9-5) will travel to Detroit to plays the Lions (5-9) at 1:00 pm ET as Tom Brady and the Bucs continue to chase the New Orleans Saints (10-4) for first place in the NFC South.

The Bucs are entering this game after squeezing out a 31-27 comeback win against the Atlanta Falcons (4-10). Aside from a fumble by Chris Godwin, the Bucs “Big 3” wide receivers all had big games as Mike Evans went for 110 yards, Antonio Brown had 93 yards while getting his first touchdown with Tampa Bay, and Godwin also had a touchdown of his own.

On the other hand, the Lions are fresh off of a 46-25 thumping courtesy of the Tennessee Titans. Lions QB Matthew Stafford exited the game with a rib injury, but he is expected to play against the Bucs on Sunday.

Unsurprisingly, the Buccaneers enter the game as the favourites to win with a -430 money line, according to FanDuel. The Lions’ moneyline sits at +340 for the game, while also being +9.5 in the spread. The over/under for the game is 54.5.

The Buccaneers started the season with a 6-2 record, but have only been 3-3 since Brown made his debut with the team. Despite their .500 play as of late, Tampa Bay is still 7th in the league for points for per game with 28.6. In comparison, the Lions are 19th with 23.9 points per game.

On the other side of the ball, things couldn’t be any further apart.

The Lions defence is averaging 31.1 points against per game, which is dead last in the NFL. Respectably, the Buccaneers are tied for 11th in the category with 22.9 points per game.

Can the Buccaneers continue their momentum?

While the Buccaneers are 3-3 in their last six games, those three losses came at the hands of the Saints, LA Rams and Kansas City Chiefs — three pretty good teams. With that being said, the Bucs have been able to beat the lowly teams this season that are more on the Lions’ level.

If Tampa Bay wants to extend their winning streak to three games, they need their “Big 3” receivers to build on last week’s performance. The Lions are allowing an average of 269 passing yards against per game over their last three games, so they are more than susceptible to attacks through the air.

The Lions also allowed 82 yards to the Titans’ tight ends last week, so the possibility of Rob Gronkowski having a good day is also pretty high.

Lions trying to end the season on a high note

The Detroit Lions are 2-6 in their last eight games and have had to deal with injuries throughout the season, including key ones to running back D’Andre Swift and top receiver Kenny Golladay, who’s only played five games this season and hasn’t been in the lineup since Nov. 1.

Matthew Stafford, who threw for 252 yards and a touchdown last week, has had to deal with rumours all season that this may be his last in Detroit after 11 years. If that’s the case, no doubt he’d want to leave town on a high note.

If Detroit wants any hope to win or even keeping it close, it’s going to have to be an offensive shootout and Stafford will have to keep slinging the ball.

Buccs to win and cover the spread

While this should be a fun game with the Buccs chasing the Saints and the Lions wanting to end the final few weeks of the season on a high note, I just don’t see how Detroit’s depleted lineup can beat Tampa Bay.

9.5 points may seem like a big spread, but with the way the Buccaneers’ offence and the Lions’ defence has been playing, I think Tampa will cover the spread.