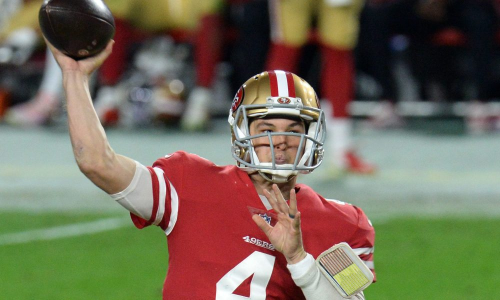 The 49ers, who’ve lost their last three games in a row, will attempt to play spoilers for the Cardinals, who are currently holding the final Wild Card spot in the NFC.

Last week, the Cardinals beat the Philadelphia Eagles in a matchup that saw Kyler Murray throw for 406 yards, three touchdowns, and 29 rushing yards with an additional touchdown on the ground as well.

Meanwhile, the 49ers lost a close one to the Dallas Cowboys in a 41-33 contest. Nick Mullens (21/36, 219 yards, 2TD, 2INT 1FUM) left the game with an elbow injury and will more than likely need surgery for it, meaning that backup C.J. Beatheard will make his first start of the season.

According to FanDuel, the hometown Arizona Cardinals are the favorites to win this game with a moneyline of -235 and a point spread of -4.5. On the other hand, the San Francisco 49ers’ moneyline rests at +194.

Defensively, the Cardinals are also ranked in the top half of the league when it comes to points against per game (13th, 23.5), versus the 49ers, who are ranked 17th with 25.1. However, the 49ers have also allowed 32.6 points per game during their current three-game losing streak.

This game will also be the second time these two teams have met this season. They last met in the opening week back in September, where the Cardinals won 24-20.

Will the offense continue to surge for the Cardinals?

If the Cardinals expect to win on Saturday, Kyler Murray will have to continue playing some of the most electrifying football of his young career.

Over his last three games, Kyler Murray has thrown for 823 yards and seven touchdowns while also rushing for 91 yards and one touchdown. While he has been battling a shoulder injury over the last several weeks, Murray is showing he’ll do what it takes to push the Cardinals to the next level.

Should the Cardinals want to continue having success in the regular season and beyond, Kenyan Drake will have to be better than he was last week. The fifth-year running back only ran for 26 yards on 10 carries and if Murray’s injury is going to prevent him from running as often, Drake will need to step it up.

It seems injuries have been the common trend for the 49ers all season, which is fitting for a year like 2020.

As mentioned earlier, C.J. Beathard will be starting in his first game of the season, however, he’s had to come into four games this season. In those games, Beathard has completed 28 of 45 passes (62.2%) for 332 yards and two touchdowns. Is it the biggest sample size? No, but Beathard has shown in previous seasons that he’s a suitable option for the 49ers for the rest of the season if needed.

The 49ers will also be without running back Raheem Mostert, who was placed on injured reserve after tweaking his ankle that’s been bothering him all season during the Cowboys game.

In better news, the 49ers could be getting a boost if George Kittle, who’s been out since Week 8, returns. Kittle has 474 receiving yards and two touchdowns in the six games he’s played this season, proving he’d provide an offensive boost for San Fransisco.

Picking the Cardinals to win and cover the spread, the over

If the 49ers had a healthier team, I could see them pulling off a win, but they’re just too hurt and allowing too many points to keep up with the Cardinals’ offense.

I also like the Cardinals to cover the 4.5 point spread, while also thinking that the game should reach the over too.t here