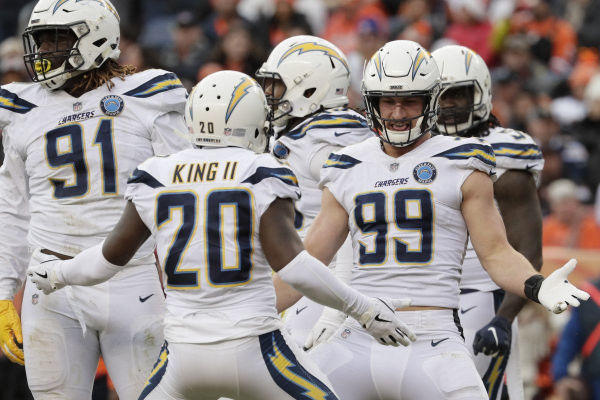 The first game of Sunday’s wildcard doubleheader consists of the Los Angeles Chargers (12-4) traveling to M&T Bank Stadium to take on the Baltimore Ravens (10-6).

For the Chargers, they come in having won 5 of their last 6; however, their one loss in that span was to Baltimore, 22-10, at home. Still, the Chargers have been a dynamic team, especially on the road. They are 7-1 on the road this season and have beaten the likes of the Chiefs, Steelers, Seahawks, and Broncos.

For Baltimore, they have seemed like a whole new offense ever since Lamar Jackson took over. He gives them a mobility threat that they never had with Joe Flacco. They ended the season winning 3 in a row and will look to hold off the Chargers at home, where they are 6-2 this season. The two will square off on Sunday with kickoff scheduled for 1:05 pm ET.

The point spread for this one comes in with the Ravens being 3-point favorites playing at home. The over/under on total points scored is set at 41.5 points.

Aging Philip Rivers Trying To Make This His Year

At 37, Philip Rivers is no spring chicken. He has been here before and is looking to get over the hump and to a Super Bowl. This season he has thrown for 4,308 yards with 32 touchdowns and 12 interceptions. He has been sacked 32 times. His leading receiver has been Keenan Allen. He has 97 receptions for 1,196 yards and 6 touchdowns.

On the ground, the Chargers are relying on Melvin Gordon. This season he rushed for 885 yards and 10 touchdowns on 175 carries. He also has 50 receptions for 490 yards and another 4 touchdowns. He missed some time with ankle issues throughout the season but was a full participant all week at practice is expected to be a major contributor in this one.

Defensively, Derwin James leads the team with 105 tackles while Melvin Ingram has 7 sacks. Desmond King and Derwin James both have 3 interceptions apiece.

Lamar Jackson has officially made this his team on offense and is now trying to get them a win in their opening round matchup. This season, he threw for 1,201 yards, 6 touchdowns, and 3 interceptions while being sacked 16 times. Just as important is what Jackson can do with his feet. He has rushed for 695 yards and another 5 touchdowns on 147 carries. The other leading rusher for the Ravens is Gus Edwards, who has rushed for 718 yards and 2 touchdowns on 137 carries.

On the defensive side, CJ Mosley has led the way in tackles (105), while Za’Darius Smith leads in sacks (8.5) and Brandon Carr, Jimmy Smith and Marlon Humphrey each have 2 interceptions apiece.

I think this could be a very entertaining matchup and a defensive battle on both sides. For the Ravens, they are going to stick to the formula that has made them one of the most intimidating defenses all season, and for the Chargers, I think they are going to try to take away Jackson’s ability to run and try to make him beat them with his arm. At this point in his career, I don’t know if he will be able to do that. I think that he is going to make some rookie mistakes and the Chargers will be able to capitalize with turnovers. While I don’t see Philip Rivers exploding for a huge game, I think that he will be able to do enough to get the win. The last time they played, both teams only had one touchdown with the rest of the points being scored on field goals. While the Ravens came out as the victors in the last one, I think it will be the Chargers this time around. I am taking LA and the 3 points in this one.