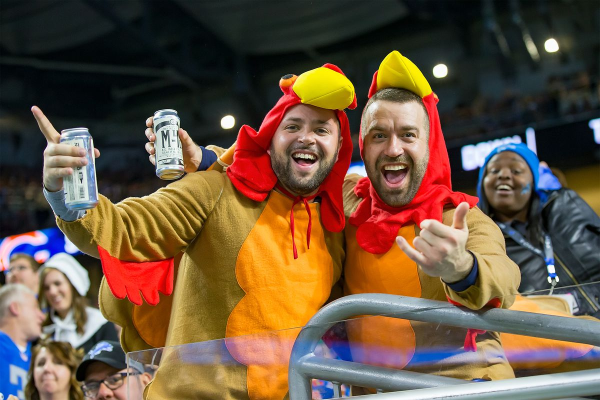 One of the best days on the American sports calendar is finally here, Thanksgiving Day! Sit down with your Turkey and turn on your tv to catch back-to-back-to-back NFL action!

Three games across the National Football League are scheduled to take place starting with an interconference showdown between the Houston Texans and the Detroit Lions. A divisional battle between the Dallas Cowboys and the Washington Football Team is up next in the late-afternoon slot, followed by the finale of the day; an AFC North rivalry game between the Baltimore Ravens and the Pittsburgh Steelers.

While the first two games of the day may not be the most attractive games, you can always make them a little bit more exciting by placing a few shekels on the outcome. Here are game day odds currently being offered at FanDuel Sportsbook.

It seems like every year we question why the Lions of all teams have the yearly tradition of playing on Thanksgiving Day, but here we are. I think the best thing to do in the early game, to get the juices (and wine) flowing, is to bet on the OVER. FanDuel has the total set at 51.5 and with these two defenses facing each other we may see points come in bunches.

If you’re going to bet on a side in this game, laying the points with the Texans has to be the move despite them being just just 3-7 ATS this season. They’re 6th in yards per play (6.1) and 2nd in passing yards per attempt (8.1) so all signs point to Deshaun Watson torching this Lions defense.

Despite both teams being just 3-7 this season, they’re just a half game back from the division lead in what has been a historically terrible NFC East. While Washington has had more lows than highs this season, their defense is flying under the radar as surprisingly one of the best units in the NFL. Believe it or not, they are allowing the fewest passing yards per game in the league at 195.4. They’re also 5th in red zone defense and 9th in 3rd down defense. Backing one of the best defensive teams in the NFL as an underdog seems to be the bet to make.

The Cowboys, on the other hand, don’t have any bright spots to point out whatsoever. Their defense ranks second last in opponent rushing yards per game (153.8) while also being 27th in red zone defense and 29th in 3rd down defense.

While it may not be the most fun Thanksgiving Day bet to make, the UNDER could be the right call if you’re looking at the total. While Washington’s defense is one of the best in the league, their offense is quite the opposite ranking 28th in yards per game (324) and 29th in points per game (20.5).

After managing to get through a couple of rough early games on Thanksgiving Day, we’ll be rewarded with one of the better games on the entire Week 12 schedule when the undefeated Steelers host the Ravens. Despite the Steelers being 10-0 and the Ravens coming off two ugly losses, taking the Ravens and the points is the bet to make.

70.62% of the Steelers offensive yards come through the air which is the 10th highest mark in the NFL. This isn’t surprising when you consider the plethora of talent they have at wideout. They may be in for a tough Thanksgiving night though as the Ravens defense ranks 3rd in the NFL in opponent yards per pass attempt. Meanwhile, the Steelers defense is 17th in opponent yards per carry, giving up 4.3 yards per rush, which could prove to be a weak point that the Ravens and their number one rushing offense can exploit.

Also don’t forget, despite the Steelers downing the Ravens 28-24 earlier this season, the Ravens out gained them on offense 457 to 221 yards in that contest.

Finally, with both teams averaging over 26 points per game, the OVER looks enticing with the total set at 44.5 at FanDuel.

The most notable betting trend heading into the holiday is that favorites have covered at a rate of 70.4% (31-13) on Thanksgiving Day since 2005.

As far as the early game goes, you should note that the total has gone OVER in ten of the Lions last eleven games at home. It’s set at 51.5 for their Thanksgiving Day matchup against the Texans.

In the mid-afternoon game, the most interesting trend is that the Cowboys are 7-1 ATS in their last eight divisional home games.

Finally, a little nugget for the prime time Thanksgiving Day game: the Ravens are 9-1 ATS in their last ten games as an underdog. They’re getting 5.5 points on Thursday night against the Steelers.