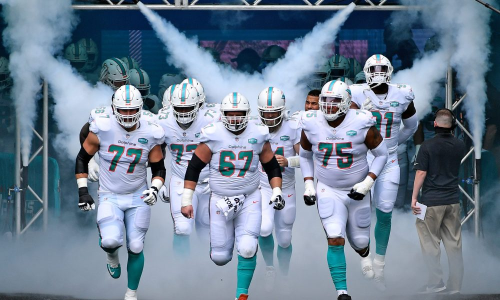 Things are looking pretty bleak for the New York Jets right now. They are 0-5, so any chance of them taking a step forward this season is lost, and they just dumped RB Le’Veon Bell. Though that definitely looks like addition by subtraction, it is an indicator that this franchise is kind of guessing right now. Their starting quarterback is out too. They are pretty much dead in the water.

In Miami, there is a lot more optimism. A couple of wins helps, but they have been mostly competitive in their losses too. They have covered in three of their last four games and even though we expect to see top pick QB Tua Tagovailoa at some point, Ryan Fitzpatrick has been leading a respectable offense that peaked last week with 43 points in a blowout upset win over San Francisco. A win this week, and the Dolphins are favored, and they can look at the last 10 games of the season with some hope of actually sneaking into the playoffs.

This is the first time that Miami has been favored this season. They are playing solid ball, but this is more about the opponent. When a team has been an underdog week after week you do have to wonder how they will fare in a favorite role. Some teams are just better as an underdog and playing at home has never been much of an advantage either for Miami. The offense has been able to move the ball and Fitzpatrick is not willing to give the ball to Tua. He competes to win, not to lose, and I think Miami feeds off that. The Miami defense has been solid throughout the season and gets a layup with the Jets coming. I would love this bet at -7 but this is still solid.

The Jets are a miserable 0-5 SUATS, with all of their losses by at least nine points. Their offense is the worst in the league, scoring 15ppg. Bell has never been a fit for what they were trying to do and getting rid of him is not going to hurt at all. The bigger problem is that quarterback Sam Darnold might not be a fit either. He is hurt and backup Joe Flacco confirmed his role with the team in the loss last week against Arizona. He has a Super Bowl ring and a lot of money, but is just average these days, probably even below that. He is not going to put this team on his back and get them that first win.

This line opened at Miami -9 and has already moved a little. It is uncomfortable giving up so many points with Miami because they are definitely not elite, but making any case for how the Jets would keep this one close, even for a half is tough. This is not my favorite bet of the day but the Dolphins are the play here.

There is no value with New York here. I give them no chance to pull the road upset. Miami would literally have to gift them the game with turnovers and penalties. Miami is the side to back but I cannot recommend such a hefty price on the Dolphins. You can use them on the money line to juice up a parlay but as a straight bet there is not much value.

The Miami offense came alive last week. They can be functional for sure, but they are not the most explosive in the league, hence a 2-3 O/U record on the season. Even though I do not expect them to break the 40s in points again, I am looking hard at the over again this week because I think the Jets ineptitude is going to set up their offense really well. They are going to get a lot of possessions and I think they can put up more than 30 points in an easy win. The Jets are 3-2 O/U this season, so their ineptitude on offense has not killed totals thus far. I think we will see the same in this one. As long as we can get a couple of drives and scores from New York, and they post around their season average in points, the over looks good.