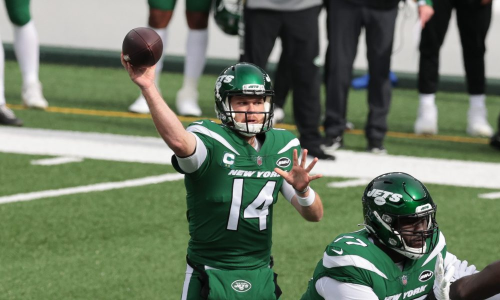 The New York Jets look like the worst team in the NFL this season, and it might not be close. The Jets are 0-7 with just one cover on the year, which is why there is a huge spread on Sunday’s game against Kansas City, the defending champs. Even though big numbers don’t usually make for interesting games, they do make for interesting wagers.

Nothing has gone right for New York this season. There was some hope that QB Sam Darnold had turned a corner coming into the year but he has been the same mistake prone, oft injured player we have seen since he entered the league. He also has the worst set of skill talent around him, made all the weaker with the release of RB Le’Veon Bell, who never fit in. This is the lowest scoring team in the league and their defense can only do so much. Last week they did not give up a touchdown to Buffalo, but still lost by eight as the offense did not score after taking a 10-0 lead.

Kansas City has just one loss on the season and is 5-2 ATS. The Chiefs have one of the most explosive offenses in the league and are off a game where they humbled rival Denver, winning 43-16 on the road. The bad part for the Jets is that Denver profiles very similarly to New York, though with a much better defense. The Broncos actually outgained the Chiefs last week, but a defensive score and a kickoff return for a touchdown gave Kansas City the easy win. It looks like the Chiefs might not have been totally ready for the challenge but got the result. That’s what good teams do.

Believe it or not this one opened even higher, as high as -21.5 in some shops. That number is ridiculous and I think it was bet down by folks who either always fade large spreads like that or those that were looking to set up a play later in the week. When it comes to forecasting the game I don’t see how New York keeps it close. Sure Kansas City could make some mistakes, but I think they would have to make three or four for this one to be close.

The Kansas City offense has so many weapons and that list now includes Bell, who smartly joined the Chiefs once the Jets released him. That might matter if the Chiefs are up big and using him in garbage time. A little extra motivation at that point of the game could help avoid a backdoor cover situation with such a large number. That is my only concern on this one. Now that the number has slipped under 20 I think this is the time to hit it. I am not expecting much move movement.

There is definitely no value in backing the Chiefs in this spot. Even as part of a money line parlay it is just not worth the risk. These are professional players and “on any given Sunday” anything can happen. I am putting forth New York only because the payoff is so great. Maybe some of the weather that is expected to hit all over the country this week makes this one sloppy enough for them to steal it. Though even that is unlikely to bridge the gap.

This total is interesting. For starters it opened at 48 and have moved up slightly while the spread came down. The other interesting part is that there is actually a chance that Kansas City could cover this number all on its own. Their O/U record is just 3-4 this season but that is often because their games are in primetime and those often get bet up – two of their under were within one score of going the other way.

They scored 43 points last week and that was without their offense doing much. That is bound to get the attention of coach Andy Reid, a master offensive architect. I think Kansas City will be very focused early on getting the offense back on track. I see them scoring at least 24 points in the first half. K.C. can play some solid defense and New York is pathetic when they have the ball, but if they can get a couple of scores of any type, I see the over cashing easily. The Chiefs have allowed at least 10 points in every game this season.