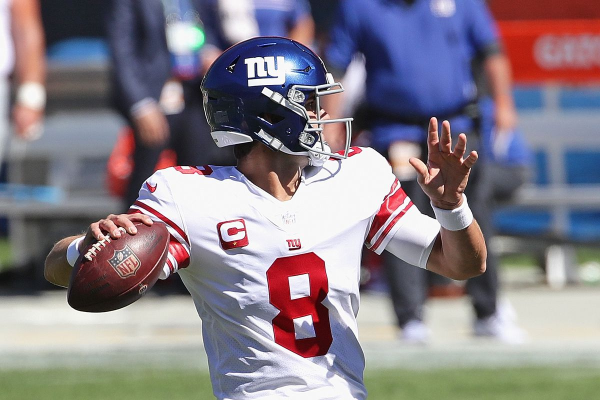 Thursday Night Football features a matchup of NFC East teams as the New York Giants (1-5) take on the Philadelphia Eagles (1-4-1). The Eagles will host this game at Lincoln Financial Field, and kickoff is scheduled for 8:20 pm ET.

After starting the season 0-5, the Giants picked up their first win of the season this past Sunday, beating Washington 20-19. In the win, quarterback Daniel Jones went 12-of-19 for 112 yards, a touchdown, and an interception.

Jones also led the team in rushing, going for 74 yards on seven carries. The Giants will look to make it two in a row on Thursday.

The Eagles come into this one after losing to the Baltimore Ravens, 30-28. Philadelphia didn’t score a single point in the first half but rattled off 22 points in the final quarter to make it close. Carson Wentz threw for 213 yards and two touchdowns in the loss and rushed for 49 yards and a touchdown on the ground.

Despite the poor records, both of these two are still very much in the hunt for the division as the Dallas Cowboys lead the division with two wins.

According to FanDuel, the Philadelphia Eagles are the favorites in this one. They sit at -205 to win while the Giants are +172 playing on the road. The spread sees the Giants at +4, and the over/under for total points is 44.5.

Offensively, the Eagles hold the advantage, although neither team has been particularly good. The Eagles sit 22nd overall averaging 23.5 points per game, while the Giants sit 31st, averaging just 16.8 points per game.

On the defensive side, it is the Giants who have held the advantage. They rank 16th in the NFL, allowing an average of 25.3 points per game to opponents. The Eagles rank 23rd, allowing 29.2 points per game.

The New York Giants certainly look to be a team in rebuilding mode, but they would like to see a bit more out of their quarterback Jones. He is 123 for 201 (61.2%) for 1,223 yards, three touchdowns, and six interceptions on the season. It has not helped that his offensive line has struggled, allowing 17 sacks thus far.

On the ground, the Giants have turned to Devonta Freeman without Saquon Barkley. Unfortunately, Freeman has not overly effective as he has averaged just 3.2 yards per carry. Granted, he was signed after the season started, but in 51 attempts, he has rushed for only 164 yards and one score.

Through the air, wide receiver Darius Slayton has been a shining star on an otherwise struggling team. He has 25 catches for 406 yards and three scores.

No other receiver has more than 177 yards. Unfortunately for Slayton, he has been hampered by a foot injury and seemed to be favoring it in the win over Washington.

Eagles Pushing To Compete In Division

Despite such a rough start to the season, the Philadelphia Eagles still have aspirations of winning the division, and a win Thursday could go a long way towards making that happen.

Leading the Eagles under center is quarterback Wentz. On the season, Wentz has thrown for 1,401 yards, eight touchdowns, and nine interceptions. While he has been sacked 25 times, he has rushed for 171 yards and four scores this season.

Speaking of the rushing attack, Miles Sanders has led the way for the Eagles this season. He currently has 71 attempts for 434 yards (6.1 yards per carry) and three touchdowns.

Unfortunately for the Eagles, though, Sanders injured his knee in last week’s game and is ruled out for this one. In his place, Boston Scott and Corey Clement will get the carries.

Also out will be star tight end, Zach Ertz. After suffering a high ankle sprain, Ertz will be out for the next few weeks.

Taking Giants And The Points

This one could be really ugly. Both sides are either missing weapons or have weapons that are hobbled. Throw on top of that the fact that neither team has been particularly good, and this could be hard to watch.

With that being said, the Giants have shown they are a little more apt on the defensive end, and in what could be a really low scoring game, that could be the difference. I am not sure who ends up winning this game, but I do like the Giants getting spotted the four points.