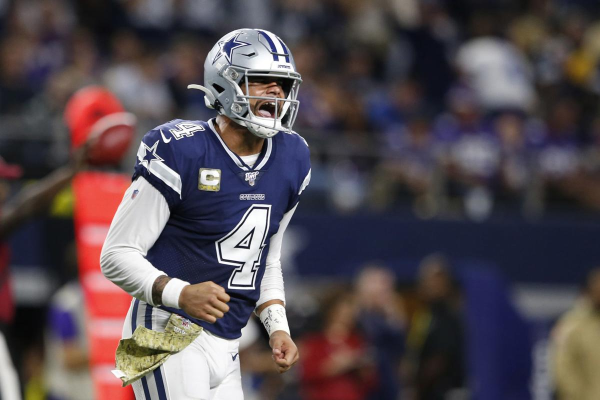 The entire NFC East division would love to hit a re-do button on the season thus far. Two of those teams within the division include the disappointing 1-3 Dallas Cowboys and the hapless 0-4 New York Giants. Sunday afternoon, those teams will meet in Dallas to try to get their seasons back on track, with the Cowboys considered a wide favorite at -7.5, according to FanDuel Sportsbook.

Here is a preview of Sunday’s contest between the Giants and Cowboys, along with keys to victory and a free pick.

New York has had a tough go of things through the first quarter of the season. The Giants have losses to the Steelers, Bears, 49ers, and most recently, the Rams, failing to score more than 16 points in any contest.

Their 11.8 points per game is dead last in the NFL, while they’re also second to last in total yards with 278. Their defense has been much improved from last year, though, allowing the fifth-fewest yards per game with 328 and giving up 24 points per game. However, teams have converted on third down against New York 53.6% of the time, the highest percentage in the league.

In his second season under center, quarterback Daniel Jones has struggled, throwing two touchdowns and five interceptions. He has also been sacked 14 times behind a below-average offensive line. Due to Saquon Barkley’s season-ending injury, veteran running back Devonta Freeman will continue to get the majority of the carries for the Giants.

The former Falcon had 11 carries for 33 yards last week in his first true start, while also playing a role in the receiving game. Speaking of receivers, the trio of wide receivers Darius Slayton, Golden Tate, and tight end Evan Engram will all look to exploit Dallas’ secondary.

Dallas’ season has certainly been entertaining, win or loss. Their one win, Week 2 versus the Falcons, they came back from a 20-0 deficit and a 39-24 deficit to win 40-39. However, they lost to the Rams to open the season and dropped shootouts against the Seahawks and Browns.

The Cowboys have had no trouble scoring, averaging 31.5 points per game through four weeks, the third-highest mark in football. They are also averaging a league-high 393 passing yards and 509.5 total yards per game. But as you can expect, the 36.5 points they’re allowing is the worst in the league, while the 430.5 total yards and 172.5 rushing yards are in the bottom three as well.

The star of Dallas’ offense this season has been quarterback Dak Prescott, who leads the league with 1,690 passing yards to go along with nine touchdowns. That’s coming out a ridiculous 422.5 yards per game, as the fifth-year man has thrown a ton this season.

Running back Ezekiel Elliot is still a weapon in the backfield, accumulating 273 yards on the ground and three touchdowns while averaging close to four yards a carry. The Cowboys also have a trio of prominent wide receivers in Amari Cooper, Michael Gallup, and CeeDee Lamb. Cooper is fourth in the NFL with 401 receiving yards while the rookie Lamb also has 309 on 21 receptions.

New York can win if they find a way to score points. Even though Barkley is out, the Giants have a golden opportunity to get some points on the board. New offensive coordinator Jason Garrett is making his return to Dallas to go up against the team he coached for the last nine-plus seasons.

So there will certainly be some familiarity with the personnel on both sides of the football. Look for Garrett to try to get Jones to throw the ball down the field more and jumpstart an offense that hasn’t scored a touchdown since Week 2.

Dallas can win if they protect Prescott. While the Giants don’t exactly have a fearsome pass-rush, the Cowboys are now without both of their starting tackles. Tyron Smith, the all-pro left tackle, is out for the season following a neck injury, joining right tackle La’el Collins on the injured list. But if given enough time in the pocket, Dak has found open receivers and will continue to do so against an average Giants defense.

First, the Cowboys, where as mentioned above, Smith is done for the year. Center Joe Looney will also miss the game due to a knee injury. On the plus side, a couple of defensive players, including edge rusher DeMarcus Lawrence and cornerback Trevon Diggs, will play after initially being listed on the injury report.

For Big Blue, linebacker Oshane Ximines is officially ruled out for the game with a shoulder injury. A couple more key defenders for New York are currently questionable; safety and punt returner Jabrill Peppers and pass rusher Kyler Fackrell. Peppers was limited in practice all week with an ankle injury, while Fackrell was limited due to an issue with his neck.

This is truly a battle where something will have to give. Either the Giants offense will break out, or the Cowboys defense will tighten up. I’m going to bank on the latter, hoping the Cowboys can cover a spread that is continuing to grow.

I’m picking Dallas to beat their division foes once again and to do it fairly easily.