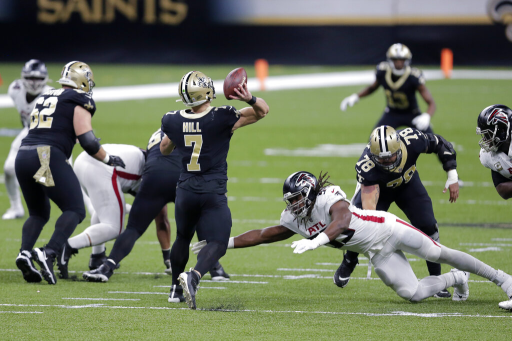 When the New Orleans Saints lost the services of star quarterback Drew Brees after a Week 10 win over San Francisco, there was a concern if they would be able to remain at the top of the NFC South and remain in the hunt for the NFC’s #1 seed.

But two games without their future Hall of Famer have produced two wins, and their hold on the NFC South has only gotten stronger. With the Tampa Bay Buccaneers losing back-to-back games, the 9-2 Saints now have a commanding advantage over the 7-5 Bucs, who they have already beaten twice. Better yet, the Saints have a one-game advantage over 8-3 duo Green Bay and Seattle for top spot in the NFC.

While the Saints are having a stellar season, the 4-7 Falcons appear to be headed for a third straight losing season. However, they come into this rivalry showdown on an uptick of form. They started the season 0-5, which resulted in head coach Dan Quinn and general manager Thomas Dimitroff being fired. Under interim coach Raheem Morris, the Falcons have gone 4-2, including wins in three of their last four games. Last Sunday, they destroyed the visiting Las Vegas Raiders 43-6.

Are the Falcons a good bet to take down the NFC’s top team on Sunday? Or is there no stopping the Saints on their march toward a division title and #1 seed?

As Matt Ryan goes, so do the Falcons: When Matty Ice is hot, the Falcons often are as well.

It has to be noted that in addition to the numbers that he has put up in wins, the Falcons also have two last-second, one-point losses in which Ryan was a combined 55 of 78 (70.5%) for 611 yards, 5 TD, and no interceptions. Ryan had a poor game in Week 11 at New Orleans, completing only 19 of 37 passes and throwing two interceptions in a 24-9 setback. If he is sharp Sunday, it bodes well for Atlanta.

Can Atlanta make Taysom Hill have to beat them? In two starts in place of Brees, Hill hasn’t had to have a big performance as a passer. Against the Falcons, he was solid, going 18 of 23 for 233 yards with no touchdowns or interceptions. He was less solid last week at Denver, completing 9 of 16 passes for 78 yards with no scores and a pick.

Atlanta’s defense needs make Hill show that he can win games with his arm. That means stopping the run. The Falcons are sixth in the league against the run, allowing 100.3 rushing yards per game, but surrendered 166 yards on the ground in the previous meeting with the Saints.

Taysom Hill to score a touchdown anytime (+105): Hill has notched two rushing touchdowns in each of his two starts. Three of those touchdowns were two yards or less. So when the Saints get close to the goal line, it’s a good bet that Hill will call his own number at some point. Hill to score two or more touchdowns is available at +650, which is also an extremely appealing option.

Falcons’ first score to be a field goal (-108): Why is this a good bet? In each of Atlanta’s last four games, their first scoring play was a field goal. Also, the Falcons have scored a touchdown on only 52.5% of their red zone possessions, which ranks 27th in the NFL.

The Saints have passed their first couple of Brees-less tests, but can they pass another? During their eight-game win streak, the Saints have gotten it done in every way possible–with offense, with defense, in close games, in blowouts, at home, on the road, with Brees, without Brees. Is there any reason to doubt them, even though this does project as Hill’s toughest test to date? Take the Saints to win straight up and the under.