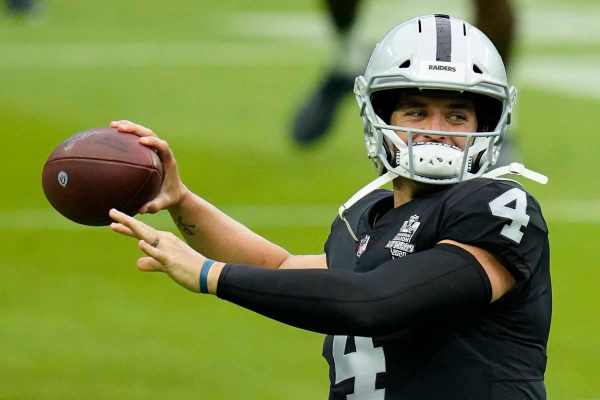 It is a new era of football in Raiders’ nation as they will officially have their first game at their new home in Las Vegas. On Monday night, the New Orleans Saints (1-0) will travel to Allegiant Stadium to take on the Las Vegas Raiders (1-0) with kickoff scheduled for 8:15 pm ET.

The Saints come into this game having won 34-23 over the Tampa Bay Buccaneers last weekend. In the win, Drew Brees threw for just 160 yards but did pick up two touchdowns along the way. Latavius Murray led the way on the ground with 15 carries and 48 yards.

Las Vegas also picked up a win in Week 1 as they beat the Carolina Panthers 34-30. Derek Carr threw for 239 yards and a touchdown while Joshua Jacobs rushed for 93 yards on 25 carries and a whopping three touchdowns.

The New Orleans Saints come into this one as the favorites despite playing on the road. The moneyline sits at the Saints -235 and the Raiders +194. The Raiders are getting 5.5 points on the spread, and the over/under for total points scored is 48.5.

In terms of total offense, the Las Vegas Raiders hold the edge. They rank 14th in the league in total yards after they put up 372 yards in Week 1. The Saints fall to 27th overall as they put up just 271 total yards despite pulling out the victory.

Defensively, the edge currently goes to the New Orleans Saints. They rank 10th overall as they allowed just 310 yards overall to the Buccaneers last week. The Raiders come in 24th as they allowed the Panthers to put up 388 yards.

After moving into a new city and opening a new stadium, there is certainly going to be a buzz around the Raiders locker room. For the Saints, they are hoping they can ruin the mood of the home team on opening night and steal a victory on the road.

Leading the way for the Saints is veteran quarterback, Drew Brees. At 41-years-old, Brees is still leading the charge for the Saints and is trying to prove that he can still put up elite numbers.

Last season, Brees played in just 11 games, but he still put up 2,979 yards, 27 touchdowns, and only four interceptions. With elite weapons around him, expect him to continue to put up solid numbers this season.

Brees will be without one of those elite weapons, though. Star wide receiver Michael Thomas has been ruled out of this game with an ankle injury. That is a massive blow to the Saints as last season, Thomas put up gaudy numbers with 149 catches, 1,725 yards, and nine touchdowns.

One player that the Saints hope to get more out of on Monday is running back Alvin Kamara. After signing a big extension, Kamara put up just 16 yards on 12 carries in the opener, although one went for a touchdown. Still, he will need to play better for the Saints’ offense to click.

Raiders Running Game Could Cause Havoc

Sometimes it is really hard to believe that Joshua Jacobs is just entering his second year. He was phenomenal for the Raiders last season, going for 1,150 yards and seven touchdowns and picked up right where he left off this season. Scoring three touchdowns in the opening game alone, the 22-year-old showed that opposing defenses will have to game plan for him if they hope to have any success.

Under center will be Derek Carr for the Raiders. Carr has been one that has always seemed to have the talent but just hasn’t shown the consistency in his career. Last year he threw for 4,054 yards, 21 touchdowns, and eight interceptions. While those numbers are solid, coach Jon Gruden hopes to elevate his game even a bit more.

Carr has some targets to throw to. Tight end Darren Waller is a big target that was able to pull in 6 catches for 45 yards last week while Henry Ruggs III led the team in receiving last week with three catches for 55 yards. Regardless of the target, this seems to be a team that could be poised to put up some points have a chance to fight for a postseason berth.

Taking The Raiders To Cover

This one is a tough one for me. Generally, I would like the Saints in this one, but I think the absence of Thomas will be a huge blow for their offense.

And the Raiders may come out with some added adrenaline given it is their first home game. Obviously, that can work both ways, but I could see Las Vegas using it to get up early.

Ultimately, I am not sure if the Raiders will end up winning, but I do like them getting 5.5 points as I think this could be close down the stretch. For my money, I am taking Las Vegas +5.5.

Tonight, two pitchers whose records could use a little polishing match up as the St. Louis Cardinals welcome the Miami Marlins to Busch Stadium to open a three-game series. Cardinals hurler Adam Wainwright has not picked up a win since May 20, while Pablo Lopez’s win in his most recent start last week was his END_OF_DOCUMENT_TOKEN_TO_BE_REPLACED