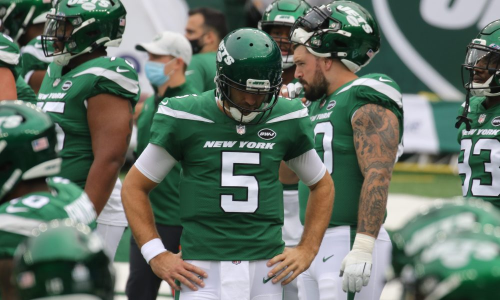 Life without Tom Brady got off to a promising start for the New England Patriots. They won their season opener, nearly won at Seattle, and started 2-1.

Since then, the Patriots have dropped four in a row. In Week 8 at Buffalo, they were driving for a potential game-winning score in the final minute. But Cam Newton coughed the ball up on a run in the red zone, resulting in a heartbreaking 24-21 defeat. Their hopes of yet another playoff appearance are slim, barring a huge run the rest of the way.

If there will be a run, it needs to start tonight. As bad as things have been for New England, the winless Jets have been worse. They appear to be destined for the #1 overall pick in next year’s draft (sorry, Trevor Lawrence or Justin Fields).

Can Cam come through? In the first few games of the season, it looked like New England’s low-risk acquisition of the former NFL MVP could potentially bring big rewards.

But prior to Week 4’s matchup with the Chiefs, Newton tested positive for COVID-19. He has not been the same since. Over his last three games, he has no touchdown passes and five interceptions. He did show some positive signs against the Bills, but that was overshadowed by his fumble at the end.

If running back Damien Harris, who has two 100-yard games in his four games this season, can produce again, a lot of pressure will be eased. If Newton can be solid, avoid costly turnovers, and make plays when needed, it could bring both points and some much-needed confidence as well.

Will the Jets show a pulse offensively?

To say that things have been ugly offensively for the Jets would be stating the situation kindly. Only once this season have the Jets scored 20 points or more.

Over their last four games, things have been especially awful. Since scoring 28 points in a Week 4 loss to Denver, the Jets have scored 29 points total in four games. In those four games, they have averaged only 240 yards per game. Ouch.

Starting quarterback Sam Darnold will be out tonight after aggravating a shoulder injury in last week’s loss at Kansas City. So Joe Flacco, who started in Weeks 5 and 6 after Darnold was initially hurt against the Broncos, will get the nod tonight. The Jets lost Flacco’s starts vs. Arizona and at Miami by a combined score of 54-10. Again, ouch.

Are there any potential positives for the Jets? Perhaps. New England is 28th in the league in rushing yards allowed per game. In their last two games, they’ve given up 197 yards and four touchdowns (vs. San Francisco) and 190 yards and three scores (vs. Buffalo).

Best Bets for Patriots vs Jets

Damien Harris over 48.5 rushing yards: The Jets have actually been respectable against the run. However, Arizona is the only team they have faced thus far that ranks in the top ten in the league in rushing yards per game or per carry.

Harris ran for 102 yards and a touchdown on 16 carries against Buffalo and is averaging 5.7 yards per carry this season. 48.5 yards is a very attainable number if he gets the amount of touches that he should.

James White over 23.5 receiving yards: As he was for Tom Brady, White remains a popular target in the passing game. In five games played, he has caught 25 passes for 171 yards. Over 3.5 receptions is also good value at plus odds. White has hit that target three times already.

Those two bets could hinge on how long the game is competitive, but they warrant a punt given White’s value as an aerial option.

Jamison Crowder over 4.5 receptions: Crowder has played in only four games this season due to injury but is expected to play tonight. If he does, Flacco will try to go to him early and often. In each of his four games, Crowder (29 catches, 383 yards, 2 TDs) has been targeted at least ten times and caught at least seven passes.

This is the kind of matchup where the props stand to be the most appealing plays. There is too much risk involved in dealing with the spread or total. That being said, the Jets stink. The Patriots should be able to take care of business and cover here.