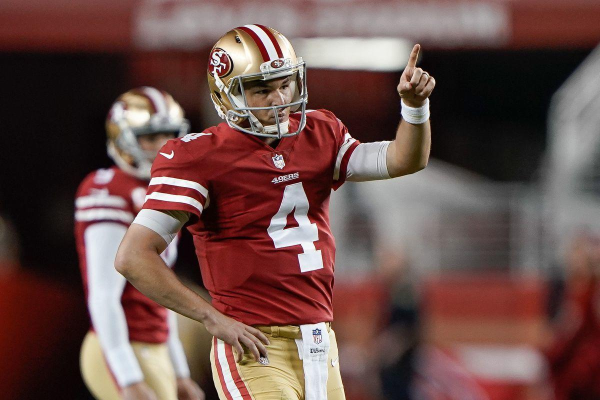 Week 10 features several games that have playoff-bound teams, ones that are playing really good football right now, but Monday night’s game is not one of them.  On Monday, the New York Giants (1-7) will be traveling to Levi’s Stadium to take on the San Francisco 49ers (2-7). For the Giants, they are coming off of a bye, but prior to that, they had lost five in a row with their only victory coming in week 3 against the Houston Texans (27-22).  The 49ers are coming off of a 34-3 win over the struggling Oakland Raiders but had lost six in a row before that. The two will square off Monday night with kickoff scheduled for 8:15 pm ET.

The point spread comes in with the San Francisco 49ers 3-point favorites at home.  The over/under on total points scored is 44.5 points.

This season is showing that it might be time for the New York Giants to move on from Eli Manning.  As important as he has been to that franchise, it has been painful to watch his struggles this year. On the season, Manning is 215 for 315 for 2,377 yards with 8 touchdowns and 6 interceptions.  In his defense, part of the problem has been the offensive line as he has taken a whopping 31 sacks on the season.

Defensively, the leaders for the Giants are Landon Collins (44 tackles), B.J. Hill and Lorenzo Carter (2 sacks each), and Janoris Jenkins (2 interceptions). While the 49ers offense isn’t going to strike fear in many, the defense still needs to step up.

49ers Looking For Win Heading Into The Bye

This has been a very injury-plagued season for the 49ers.  Jimmy Garoppolo is out, Matt Breida seems to be hurt every other week, Raheem Mostert is out, the wide receivers have been dealing with a plethora of issues over the season.  Still, the show must go on, and last week the show was pretty exciting with Nick Mullens under center. In his first start, Mullens went 16 for 22 with 262 yards passing, 3 touchdowns, no interceptions and didn’t even take a sack.

On the receiving side of things, tight end George Kittle has been the go-to this year.  He has 41 catches for 692 yards and 3 touchdowns. Behind him are Pierre Garcon (24 catches, 286 yards, 1 touchdown) and Kyle Juszczyk (21 catches, 255 yards, 1 touchdown).  On the ground, Matt Breida has led the way with 531 yards and 2 touchdowns on 96 carries.

Defensively, the leaders for the 49ers are Fred Warner (56 tackles), DeForest Buckner (5.5 sacks), and Jaquiski Tartt and Antone Exum with an interception each.

This one really comes down to a coin flip for me.  While the Giants have more of the star power (Saquon Barkley, Odell Beckham Jr., Eli Manning), the offense has been absolutely miserable this year. Part of that is because Eli just seems like the game has passed him by, but the entire unit has seemed flat all day. While I don’t think that Nick Mullens is the second coming of Joe Montana, he had a nice game last week, and I think with all of the injuries those that are getting a chance in San Francisco are playing hard and trying to take advantage of it.  That is something I can’t always say about the Giants players. It might be ugly, but for my money, I will take the 49ers giving up the 3 points.