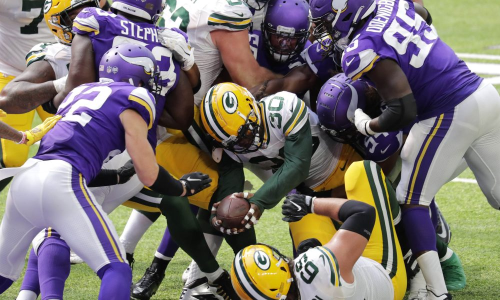 Sunday afternoon will feature a battle between two NFC North rivals. The Green Bay Packers are set to face off against the Minnesota Vikings on November 1st at 1 PM EST.

Heading into this game against the Vikings, the Packers are coming off a dominant 35-20 win against the Houston Texans. After getting beaten handily by the Tampa Bay Buccaneers, the Packers destroyed the Texans thanks in part to an outstanding performance from star receiver Davante Adams, who racked up 196 yards and two touchdowns.

Green Bay played this past week, but the Vikings are coming off a bye week. Minnesota desperately needed this bye after a 1-5 start to the season and an ugly 40-23 loss to the Atlanta Falcons in week 6.

As one would expect based on both of these teams’ records, the Packers are heavy favorites. According to FanDuel, the Packers are 6.5 point favorites, while their moneyline odds sit at -310, with Minnesota at +250. FanDuel expects a fairly high scoring game as the O/U is set at 54.5.

Looking at the offensive side of the ball, it is not a surprise that the Packers have the better offense. According to football outsiders, the Packers currently sit 4th in DVOA, while the Vikings sit at 20th.

A big part of the Packers offensive success has come from the outstanding play of Aaron Rodgers. Rodgers has re-emerged as a dominant QB after a not so Aaron Rodgers like season last year. The Packers have the 6th best passing offense according to Football Outsiders.

The defensive side of things is a bit different. While neither team has a particularly dominant defense, the Vikings have been slightly better, with the 16th ranked defensive DVOA, while Green Bay ranks 30th in the same statistics.

The Packers look to continue their winning ways

After a 13-3 season that landed the Packers in the NFC Championship, Green Bay has continued to dominate. The main reason the Packers have won a majority of their games is because of their offense. Aaron Rodgers has torched the NFL through 6 games as he has a PFF grade of 92.4.

Rodgers hasn’t been the only dominant person on the Packers offense. Davante Adams has shown this season why he is one of the best receivers in the NFL. While Adams has only played in 4 games due to injury, he has still been great, as he has two games with 150+ receiving yards, with one of them coming already against the Vikings.

The Packers have one of the best passing offenses in the NFL, but they also have a great running game as well. According to football outsiders, the Packers have the 10th best rushing offense, even without Aaron Jones for last game.

The Vikings look to knock off the Packers

While the Packers have continued their winning ways from the previous season, the Vikings have gone in the opposite direction. The Vikings finished 10-6 last season and made the NFC divisional round last season, but now have gotten off to a horrible start at 1-5.

Last season Minnesota had one of the most potent offenses in the NFL with Kirk Cousins, Stefon Diggs, and Adam Theilen, but things have not gone as well this season. Minnesota shipped Diggs away to the Bills for a 1st round draft pick, and now Minnesota has the 20th worst DVOA in the NFL according to Football Outsiders. While their slide isn’t completely based on losing their top receiver, it certainly doesn’t help.

While the Vikings don’t have the best passing attack, they do have a great running game. Running the ball can be oftentimes ineffective even when teams are good at it, but at least Minnesota has a the 4th best rushing offense according to Football Outsiders.

Minnesota and Green bay have played once already this season, with the Packers beating the Vikings 43-34. Since these two teams already played each other in what was a very high scoring game, I think the over may be a good bet again.

In regards to the game itself, I think the Packers win and I think they win big. Green Bay is the far superior team and should be able to beat them by 7 comfortably, even if the game turns into a shootout.