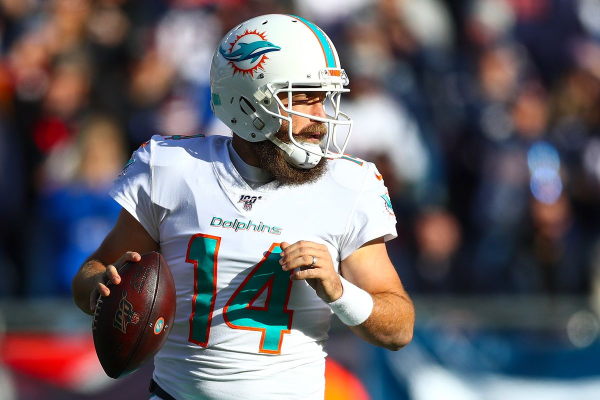 Thursday Night Football features a matchup of AFC teams as the Miami Dolphins (0-2) travel to TIAA Bank Field to take on the Jacksonville Jaguars (1-1). Kickoff for this one is scheduled for 8:20 pm ET.

Despite the 0-2 start, the Dolphins have played some quality teams pretty tough. In Week 2, they lost to an undefeated Buffalo Bills team but gave them all they could handle before coming up short 31-28.

In the loss, Ryan Fitzpatrick threw for 328 yards and two touchdowns while Mike Gesicki had eight catches for 130 yards and a touchdown. They will look to finally get over the hump and get their first win on Thursday.

The Jaguars beat the Colts 27-20 in Week 1 before falling 33-30 to a tough Tennessee Titans team last week. The Jaguars held Derrick Henry to 84 yards on 25 carries (3.4 yards on average).

Despite losing, Gardner Minshew played well, throwing for 339 yards and three touchdowns. The one knock was the two interceptions he also had. James Robinson led the attack on the ground for the Jaguars, rushing for 102 yards and a touchdown on 16 carries.

According to Fanduel, the Jaguars are the favorites in this one. Their moneyline sits at -164 while the Dolphins are at +138. The spread features the Dolphins +3, and the over/under for total points is 48.5.

Defensively, it is Miami that holds a slight edge. They rank 18th in terms of points allowed per game at 26. The Jaguars come in one spot later at 19th, allowing an average of 26.5 points per game.

After coming up short in their first two weeks, the Dolphins will be hungry coming into Week 3 at Jacksonville. This is a win they want to get given that they follow this matchup with the Seahawks and the 49ers.

To lead them on the offensive side, they will turn to quarterback Ryan Fitzpatrick. Last season, in 15 games (13 starts), Fitzpatrick went for 3,529 yards, 20 touchdowns, and 13 interceptions. While he may not be an elite quarterback in the NFL, Fitzpatrick consistently gives the team a chance to win.

Fitzpatrick hopes that one of his best weapons will be fully healthy, as DeVante Parker practiced in full pads on Wednesday for the first time all season. Last season, Parker had 1,202 yards receiving and nine touchdowns in 16 games. The Dolphins hope he can get back on track after only catching a combined 100 yards and a single touchdown through the first two games.

Jacksonville Look To Get Back On Winning Side

After losing a heartbreaker last weekend, the Jaguars will look to get back on track in this short week. They will be trying to do so without a couple of regulars, though. Kicker Josh Lambo and center Brandon Linder are both out for Thursday. Wide receiver D.J. Chark Jr. is also listed as questionable.

As mentioned, DJ Chark is listed as questionable, but the consensus is he will be in the lineup. After pulling in 73 receptions for 1,008 yards and eight touchdowns last year, he has just seven receptions for 109 yards and a score in 2 games this season. He will look to get on track Thursday.

Taking Miami And The Points

When you consider that teams are usually spotted about three points for being at home, the line has this game as a pick’em. With that in mind, I will take the team getting spotted the points.

I wouldn’t blame you if you took Jacksonville, but for my money, I am taking the Dolphins and the points at +3.

Tonight, two pitchers whose records could use a little polishing match up as the St. Louis Cardinals welcome the Miami Marlins to Busch Stadium to open a three-game series. Cardinals hurler Adam Wainwright has not picked up a win since May 20, while Pablo Lopez’s win in his most recent start last week was his END_OF_DOCUMENT_TOKEN_TO_BE_REPLACED