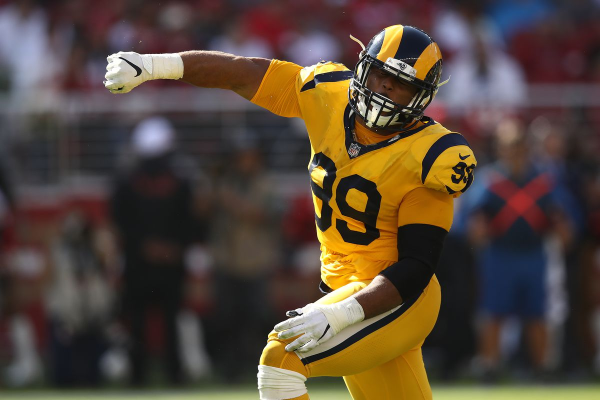 Sunday features an NFC West showdown as the Los Angeles Rams (3-1) take on the San Francisco 49ers (2-3) at Levi’s Stadium. In what should be an excellent division, both of these teams are chasing the unbeaten Seattle Seahawks. Kickoff for this one is scheduled for 8:20 pm ET.

For the Rams, they come into this one having won four of the first five, including two in a row. In their last contest, they beat Washington 30-10. In fact, their only loss of the season was a 35-32 defeat to the Buffalo Bills.

It has certainly been a rough start to the season for the San Francisco 49ers. They have lost three of five, including their last two.

Their last matchup was particularly ugly as they lost to the Miami Dolphins, 43-17. Their only two wins of the season have been against the lowly Jets and Giants teams.

According to FanDuel, the Rams come into this one as the favorite despite playing on the road. They are currently -172 to win this matchup while the 49ers’ moneyline sits at +144. The spread features the 49ers +3, and the over/under for total points is 52.

Defensively, it is once again the Rams who hold the edge. They currently rank 3rd in the NFL when it comes to points allowed per game at 18 points. The 49ers come in a respectable 11th allowing an average of 22.8 points per game.

The Rams have certainly looked like postseason contenders thus far this season and will look to get their fifth win at the expense of the 49ers. To do so, they will look to Jared Goff to lead them under center.

Goff is 109-for-152 for 1,372 yards, eight touchdowns, and just three interceptions on the season. He has also rushed 19 times for 29 yards and an additional two scores.

Defensively, Aaron Donald continues to look like a man amongst boys. Through five games, he has 7.5 sacks and 17 tackles. The next highest sack total is Troy Reeder, who has three. Darious Williams leads the secondary with two interceptions.

Can the 49ers Bounce Back Against Division Foe?

The San Francisco 49ers have been battling an array of injuries early in the season, but they are still hoping that what should be a healthier roster can lead them back to .500 by the end of the weekend.

Under center for the 49ers should be Jimmy Garoppolo. After injuries caused him to miss time early in the season, Garoppolo played briefly against the Dolphins last week but was ineffective. He threw for just 77 yards and two interceptions while also being sacked three times.

After a full week of practice, though, the hope is Garoppolo should be good to go. Garoppolo should also have his top weapon in George Kittle available. Despite dealing with his own injury issues this season, Kittle still leads the team with 23 receptions for 271 yards and a touchdown.

One last area that has seen some health issues is running back. Raheem Mostert finally returned last week and was solid despite the loss to the Dolphins. He rushed 11 times for 90 yards while also hauling in three receptions for another 29 yards.

Taking The Rams On The Road

This one comes down to consistency. While the 49ers look like they should be a solid team on paper, injuries have led to major consistency issues. While they appear to be on the mend, last week’s blowout loss should give pause to those jumping on the 49ers’ bandwagon.

On the other hand, the Rams have consistently been solid all season long. While it is always challenging to go on the road, the spread on this one seems relatively light. For my money, I am taking the Rams not only to win but to cover the three-point spread as well.