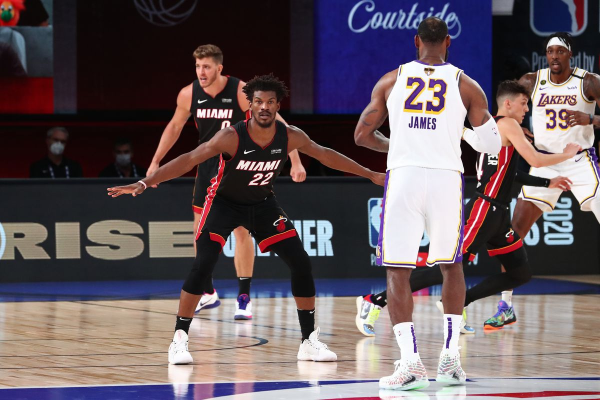 Just when you thought the series was over, the Miami Heat reminded everyone why they earned a spot in the NBA Finals. Following their thrilling Game 5 victory, the Heat will look to even up the series Sunday night against the Los Angeles Lakers, who once again will try to clinch their 17th championship in franchise history.

Here is a preview for Game 6 between the Lakers and Heat, complete with a free pick. Currently, on FanDuel Sportsbook, Los Angeles is the favorite at (-5.5), a significant difference compared to the -7.5 or more they’ve been for the previous games in this series.

Through two games, it looked like the Lakers were well on their way to a sweep. Led by Anthony Davis’ 34 points and aided by injuries to two of Miami’s key players, Goran Dragic and Bam Adebayo, Los Angeles took Game 1 by a final score of 116-98. Two nights later, LeBron James dazzled to the tune of 33 points, nine rebounds, and nine assists as L.A. won 124-114.

However, in Game 3, Jimmy Butler was a man on a mission. The star dropped a 40-point triple-double to lead the Heat to a 115-104 upset. Miami also held Davis to just 15 points in the big win.

Unfortunately for Miami, in Game 4, Davis was a force on both ends, particularly on defense late in the game. The Lakers responded with a 102-96 win. LeBron also led both teams with 28 points while chipping in 12 boards and eight assists.

With the Lakers on the verge of a title, Game 5 will likely go down as an all-time classic Finals game. Both Butler and James traded big shots throughout the game, particularly in the fourth, but Danny Green’s miss on a wide-open three late clinched Miami’s 111-108 victory. Butler finished with 35 points, 12 rebounds, and 11 assists for his second triple-double of the series, while James had a game-high 40 points with 13 rebounds.

Los Angeles can win if: They cut down on the number of defensive lapses. Throughout Game 5, the Lakers would find a way to come back from a deficit, only to find themselves very quickly down by a few points again. Miami made L.A. pay for their turnovers and defensive mistakes with easy buckets and open threes, which they hit at an above-average clip. The Lakers will have to play with more aggressiveness and consistency on defense to force the Heat to earn each basket.

Additionally, L.A.’s supporting cast will need to step up. The Lakers’ non-stars were badly out-played on Friday by Miami’s supporting cast; Kentavious Caldwell-Pope was the only one who scored more than eight points. The Lakers will be in a much better position to win if guys like Green and Kyle Kuzma are more efficient when shooting.

Miami can win if: They shoot the three like they did in Game 5. The Heat have always been a good three-point shooting team, and wedge that in full effect on Friday. As a team, Miami went 14-for-33 from beyond-the-arc, good for 42.4 percent; this was a significant increase from the 36.6 percent clip they’ve shot the three at for the series. A big part of that was due to Duncan Robinson, who by himself was 7-for-13. With Davis guarding the paint, Miami’s best chance to win will be outside shooting.

Of course, there is the possibility that Butler can carry the whole team on his shoulders once again. His performances in Games 3 and 5 were magnificent, but fatigue may creep in. Butler played 47 minutes in Game 5, up from the 42.7 he’s averaging this series and way higher than the 33.8 he averaged in the regular season. Even with great three-point shooting, the Heat may still need their star to leave it all out on the court one more time.

Just like we saw in Game 4, the Lakers respond well after losses. They went 16-7 this season after losing the previous game and are 4-0 this postseason, winning by an average of just under 11 points in those playoff games. Los Angeles has also learned their lesson after Friday, with many of them likely expecting a title celebration that night. I expect the Lakers to respond in a big way, running past a fatigued Heat team and delivering the city of Los Angeles title number 17.