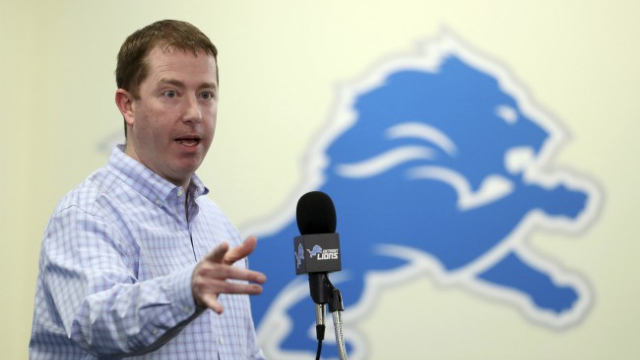 The Detroit Lions haven’t been good since … well, ever. Now that they have the third overall pick in Thursday draft, perhaps the future could be changing for the better.

With having the No. 3 overall pick comes great responsibility. Lions GM Bob Quinn has hinted that the most coveted pick in the draft, aside from the ones owned by the Cincinnati Bengals and Washington Redskins, may be available for trade.

“If I’m going to do something, I think we’ll have a pretty good idea Thursday afternoon of kind of where we stand. I don’t think I’m going to be making a huge decision on trading the No. 3 overall pick while I’m on the clock, while I’m virtually talking to our head coach and our other personnel.”

Most Lions fans are wondering what Quinn will end up doing with the pick, considering this is the highest pick he’s ever had in his possession – a span of almost two decades in New England and now five years in Detroit. Quinn says he never wants to be in this spot ever again.

Not Just Any Deal

While Quinn is open to a trade that brings back multiple picks in return, it would need to be an absolutely perfect deal for him to even consider it.

“I could see a scenario, yes, but ideally, no,” said Quinn. “Obviously, I say this all the time, but it takes two teams to do a trade. So when you’re trading back, you’re going to trade back after 10 or 11, you have to know the ramifications of that.

Having the No. 3 overall pick is truly a tough spot this year. The Lions have their choice of picks, like Alabama QB Tua Tagovailoa, Ohio State CB Jeffrey Okudah or Auburn DT Derrick Brown – or trading out of that spot to set themselves up better for the future in another way.

“We have to do a good of making sure … the player we select can come in right away, especially if we’re drafting that early, come in day one and be a player, be a guy that can in and help us win games,” said Quinn. “We can always give rookies a little bit of leeway to learn the system and all those things, but I think this year is a little different.

“We’re making sure this year that we’re making the right decision that a guy can come in and – maybe without a full offseason program – come in and contribute. That’s the goal every year. That hasn’t changed. We’re just in a little different atmosphere right now.”

FanDuel Sportsbook has some interesting odds on the third pick in the draft. Currently, the No. 3 overall pick (not necessarily going to the Lions) being Okudah at +110 odds, Tagovailoa at +350 odds, and Brown at +600 odds.

Of course, you have to wonder what the Lions are going to do with current QB Matthew Stafford. If they draft one of the young signal-callers early on, that is the writing on the wall for the future. Should Stafford get traded, look for teams like the Los Angeles Chargers and Miami Dolphins to have a high level of interest.