Lamar Jackson Doomed to Implode Against the Tennessee Titans on Sunday 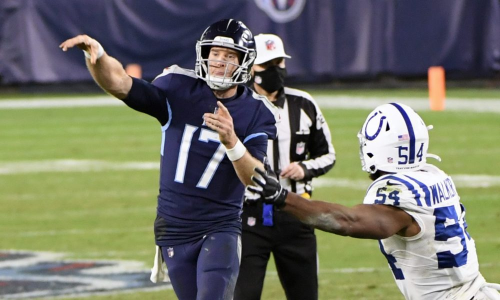 The 6-3 Tennessee Titans are set to face off against the 6-3 Baltimore Ravens this weekend, and it’s obvious that the game will mean different things for each team. For example, the Ravens are 3 games behind the undefeated Pittsburgh Steelers and absolutely need a win on Sunday, if they want any chance of chasing down the juggernaut of their division.

There is always the possibility of a wildcard spot for the Ravens, but even that seems like a bit of a stretch after a 23-17 loss to the New England Patriots. Keep in mind that the Patriots are one of the worst teams in the league right now, and you can start to see why Baltimore could be in danger of imploding as the season progresses.

As for the Tennessee Titans, they are in a tie with the Indianapolis Colts for first in the AFC west, which gives the team a little extra incentive to win the game. That shouldn’t be too hard to accomplish, especially with the combination of Ryan Tannehill and Derick Henry, but it’s worth noting that they are coming off a loss against the Indianapolis Colts.

What made the loss even worse is the fact that Tannehill only managed to get one touchdown during the entire game. An argument could be made that he at least managed not to turn the ball over but struggling to score is not a great sign. Another problem during that game was Derrick Henry, who Managed 103 yards but couldn’t get into the end zone when it counted. These factors and more pretty much leaves both teams in a virtual freefall.

Lamar Jackson was supposed to be the future of the NFL, and while he has somewhat carried that moniker valiantly, he has had several missteps this season. One of his biggest problems seems to be his turnover issues, which has resulted in 3 interceptions in the last 5 games. That’s not a good sign for the final stretch of the season where Jackson will be up against some of the best defenses in the entire league.

Going back to the Tennessee Titans, and it really comes down to whether Derick Henry can impose his will on the Ravens defense. That might be difficult due to the Ravens having the 13th best run defense in the league, but the Titans might be able to find ways around this with Ryan Tannehill. It’s all just a matter of how well the Titans can work together and get the ball down the field.

Lastly, the Titans are going to need to get a solid game out of Tannehill, who has been pretty shaky lately during games.. You might think that Jackson’s implosion was worse, but the Titans have lost 3 out of their last four games and a lot of that has to do with Tannehill not being effective enough under center.

A big example of that was their matchup against the Pittsburgh Steelers a few weeks ago, which resulted in the team’s first loss of the season. Although the loss can’t be fully blamed on Tannehill, his three interceptions during that game had to play a huge role. It also showed just how ineffective Tannehill can be if you get him out of a rhythm or he can’t rely on the run game.

Who has the blowout though? While a lot of people might want to say that Baltimore achieves this due to their defense, Lamar Jackson’s lack of production seems to point to a victory for Indianapolis. Then again, it might not be a blowout, it might just be both Quarterback’s trying to outdo each other and Lamar Jackson being the one to come up short.

Believe it or not, the game is really going to come down to which team is able to stand firm and enforce their game plan. For the Ravens, that’s going to be Lamar Jackson reducing his turnover numbers and working on getting the ball down the field more. For the Titans, it will likely be on Tannnehill’s production and how well Derrick Henry is at raking up yards against the Ravens defense.

In the end, try putting some money on the Indianapolis Colts to win this game by a score 27-14. The deciding factor will ultimately come down to Jackson not being able to exercise his turnover demons and losing the ball on a crucial play. The Colts can then hand off the ball to Henry, who can rake up yards and eat up time. As long as Tannehill can play small ball and take risks, it’s going to be the Titans coming out on top.