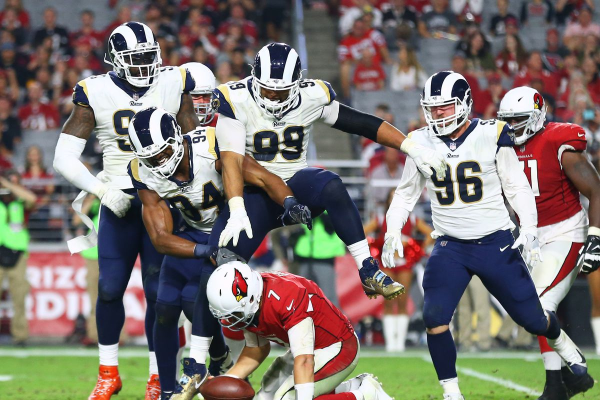 The NFC West is really tight, just one game separates each place in the standings. The Rams are still just ahead of the Cardinals after both lost close games last week.

Los Angeles looked like it was ready to make its move after posting back to back wins before last place San Francisco humbled them last week. Some games it looks like this team has it all and other you just wonder about them, which makes you wonder whether QB Jared Goff is just not a winner, or coach Sean McVay is not the right guy, or both. They would be helping themselves a lot if they got this win at Arizona.

Arizona is one of the most confounding teams in the NFL. There is no doubt that QB Kyler Murray is a special talent, but he has to start using his gifts towards winning more consistently. They have lost two of their last three to put their playoff chances in doubt and too many times it seems like he is more interested in toying with opponents than just making the next right play. The defense is nowhere near elite too so they need a guy back there who doesn’t expose them too much. Sometimes those super quick drives are terrible for the defense.

It was surprising to see the Rams as the favorite on the road. They are only up by a game in the standings and are just solid on the road at 3-3 ATS. L.A. definitely has the better defense of the two with Aaron Donald the ultimate scheme recker on the defensive line. One thing to be aware of is that Murray is probable with a shoulder injury. If it looks like he is not going to play there is no way you can bet on Arizona. These teams have not yet met this season and the Rams have owned the series recently, winning six straight, covering in five, so maybe the McVay does have an advantage over Arizona head coach Kliff Kingsbury. If Murray was in form you can take the points with the home side, but without that spark the Rams are the smarter option.

On the money line there is nice value with the Cardinals. They are at home and they are definitely the team with greater urgency. All of those losses to the Rams are something to overcome, but Murray has shown that he can lead his team back and rise to the occasion. You might want to wait on the first possession and see how he looks on the field and then make the play, but the Cardinals are good money line value here.

This total is lower than expected as often Cardinals games can get a little wild, especially late. Over those last six games where the Rams have been on a run against Arizona, four have gone under the total. If the Rams are going to be in control of the game then a lower score is definitely the way to go. They will run the ball with the lead and are more methodical than explosive. While the Rams are the ATS play, rather than a low scoring game look for one like the last time these played, a 31-24 win by L.A last year. The Cardinals have to win and will have to take some risks. That can juice up the scoring.