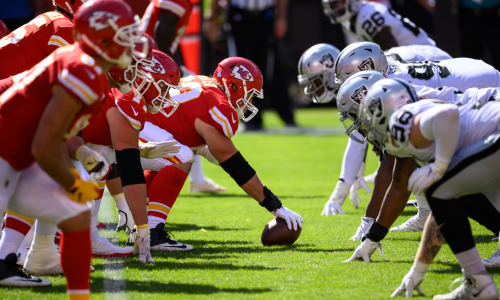 Kansas City might not have the best record in the league, but they are still the best bet to win the Super Bowl. The Chiefs are 4-0 SUATS on the road this season and though the numbers say their offense is only second best in the league, I would definitely put them first. This is a big division game so it should have their full attention. Perhaps they were looking past the Raiders the last time they played.

The Las Vegas Raiders are just a couple of games behind the Chiefs in the AFC West, but the gap is much greater than that. They are on a roll with three straight up and ATS wins in a row and they are also the only team that has beaten Kansas City this season, on the road too, so they know how to do it again, in theory. The question is whether they can especially with what is going on with the team right now.

Coming off the Super Bowl the Chiefs are a more public team than ever. With that high-flying offense and the face of the league in QB Patrick Mahomes, every KC game is must see TV and that always draws action. As a result you usually pay a premium with Kansas City, yet they are still a very profitable 6-3 ATS. With the way they score this 6.5 point spread is not really a big one, in fact, this would be the third smallest line of the year so don’t shy away just because you prefer numbers where you don’t need a full TD to win. KC has covered in all three games where the number was 7 or less.

When the Raiders beat the Chiefs a few weeks ago they were +11 underdogs and they were in good health. Right now ,the reports coming out of Vegas are that the entire defense is being decimated by COVID-19, to the point that I am not sure whether this game even goes forward. In the win it was the offense scoring 40 points that was critical but the defense has to be there to slow KC down a little. The Chiefs scored 32 points in that game and I do not think the Raiders can be all that confident if they give up that number again.

With the info that is coming in it is going to be harder and harder to get this current number on KC. They should be highly motivated and very advantaged so now is the time to bet it. I would take it up to -9.5 if you have to.

This is a tough one. I did not see the Raiders win over Kansas City as even a possibility a few weeks back. I didn’t think Kansas City would lose a home game this season, even if Arrowhead Stadium is not the environment it can be under more normal circumstances. At this point of the season the Chiefs are primarily playing to try and grab that top spot in the AFC. Other than that, getting some revenge against the Raiders might be their next best goal. That will fuel a win. There is good value with Vegas given the previous win, but I am not seeing a second win over the top team in the league.

The last times these two teams met there was a total of 72 points scored. That game cruised over, which was in keeping with Las Vegas’ 6-2-1 O/U record, but Kansas City is actually just 4-5 O/U on the season. Assuming this game comes off, this will be the highest total of the season for a Chiefs game. Even with that I am on side with the over. KC scored 32 against the Raiders the last time and that is about what they score on average. Against a defense that looks like it could be missing several players, I think it is very safe to assume they can top that. The 40 points that the Raiders scored might be hard for them to duplicate, especially because they ripped off some really big scoring plays. I think they can get at least 24 though and that should make this total easy to cover.

After extending their hot and San Diego’s cold streak, the Seattle Mariners will be looking to leave Petco Park with a two-game sweep as they take on the Padres this afternoon. Yesterday, the Mariners pounded out a dozen hits and plated eight runs, and Chris Flexen pitched 6.2 shutout innings to collect his third straight END_OF_DOCUMENT_TOKEN_TO_BE_REPLACED