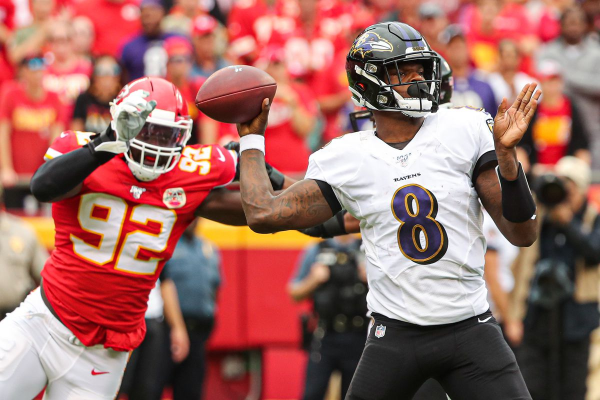 We’ve got a great game on Monday night to put a cap on Week 3 of the NFL season as the Kansas City Chiefs take on the Baltimore Ravens. These two teams began the series with the best odds to win the Super Bowl, which means this could easily be a preview of the AFC Championship Game. At home, the Ravens are listed as 3.5-point favorites with an over/under of 54.5 points.

After two games, Baltimore is arguably the most impressive team in the NFL. The Ravens started the season with a 32-point win over the Browns and followed it up with a 33-16 road win over the Texans last week. Of course, with Cleveland at 2-1 and Pittsburgh at 3-0, the Ravens aren’t likely to run away with the AFC North title as they did in 2019, putting them under a little pressure to win on Monday.

As for the Chiefs, they had to breathe a sigh of relief after last week’s game with the Chargers. Kansas City had to overcome a 17-6 deficit and escape with an overtime win after being out-gained, which has been a rarity for them over the last two seasons. After a close call, the Chiefs will be eager to get back on track, even if it means going on the road to beat one of the best teams in football.

With the addition of running back Clyde Edwards-Helaire, the Kansas City offense looks a lot different from a year ago. While he was held in check by the Chargers last week, the rookie from LSU gives the Chiefs a dimension they haven’t had the past couple of years.

Edwards-Helaire is capable of being a workhorse back, as well as a receiving threat. With Tyreek Hill and Sammy Watkins being deep threats and Travis Kelce being a huge threat on medium routes, the Chiefs now have a capable running back and a check-down option, making them even more versatile offensively.

Of course, the Chargers had a little success defensively last week when they put pressure on Patrick Mahomes. While they had just one sack, the Chargers were able to get eight hits on Mahomes, which helped knock him a little off his rhythm.

Of course, he still managed to throw for over 300 yards despite a modest completion percentage. The Ravens will have to replicate that pressure on Mahomes, which they appear capable of doing with six sacks over their first two games.

Once again, reigning MVP Lamar Jackson looks like a near-unstoppable force. He’s completed over 77% of his passes through two games with four touchdowns and no interceptions.

He’s also the team’s leading rusher with Baltimore employing a three-man rotation in the backfield that’s been made stronger by the addition of big-play threat J.K. Dobbins. Wide receiver Marquise Brown also appears to have taken a step forward, making the Baltimore offense even better than last season.

That being said, the Kansas City defense also looks much-improved from a year ago. While far from perfect, the Chiefs have allowed just 20 points in each of their first two games. Even Deshaun Watson and Houston’s strong contingent of wide receivers couldn’t find sustained success against the Kansas City defense.

That’s a good sign that the Chiefs are a little more balanced between offense and defense than when they won the Super Bowl.

Even with Baltimore coming off a dominating performance and the Chiefs being a little ho-hum last week, Kansas City as an underdog doesn’t feel right. The 3.5-point spread is a bit high, especially since the Ravens won’t have a home-field advantage outside of 250 family members in attendance.

On top of everything, this game could down to two of the best kickers in the game, meaning either team winning by more than 3.5 points is unlikely. Bet on the Chiefs to beat the 3.5-point spread on Monday night.