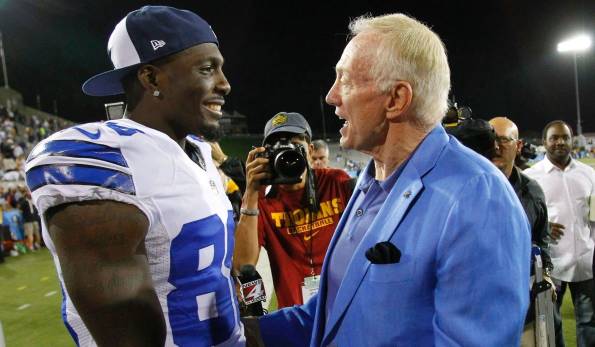 From quarterback to receiver to star players on the defensive side of the ball, the Cowboys will be making some big decisions on their free-agent players very soon. In the midst of it all, owner Jerry Jones is toying with the idea of bringing back a fan favorite.

One year after getting Jason Witten back in a Cowboys uniform, Jones may do the same exact thing with former Dallas receiver Dez Bryant.

When asked about whether or not he’s been considering a reunion with Bryant, Jones said, “I have been. I’m not dismissing it. I don’t want to sound like it should be dismissed by saying it. I’m thinking about it.”

Bryant, who’s been working out near the Dallas facility in Frisco, Texas, hasn’t played since suffering a torn Achilles tendon in his first practice with the Saints in 2018. He last played for Dallas in 2017, when he caught 69 passes for 838 yards and six touchdowns.

The Cowboys then released the receiver because of a large base salary and declining production mixed with injury issues.

Now, Jones is far from ruling out a return for the three-time Pro Bowler as he faces a vital free agency period for his franchise.

They say everything is bigger in Texas, and that feels particularly true when looking at some of the deals Jones has been handing out recently. Over the past year, Jones had given big-money deals to running back Ezekiel Elliott, defensive end Demarcus Lawrence, tackle La’el Collins, and linebacker Jaylon Smith.

Now, a few more players are due.

The biggest name of the bunch is, of course, Dak Prescott, who’s been a solid quarterback for Dallas since taking over for Tony Romo. With the young QB expected to become one of the highest-paid players in NFL history, the two sides have been unable to agree a deal thus far.

Then there’s Amari Cooper, who the Cowboys traded a pair of first-round draft picks to get their hands on. Cooper is set for free agency after playing out the 2019 season on his $13.9 million option year.

On the defensive side of the ball, both defensive back Byron Jones and defensive end Robert Quinn will need new deals to stay Cowboys.

It feels like the dominos will begin to fall once the Prescott situation is resolved. If a deal is agreed, the Cowboys then have the option to franchise tag someone like Cooper and potentially reach deals with their defensive players.

If the Cowboys are forced to tag Prescott, it will be very difficult to keep all three others, and it wouldn’t be a shock to see two of them sign big contracts elsewhere.

Would Bryant be Joining a Contender?

After failing to make the playoffs in 2019 and making a coaching change, would Bryant potentially be joining a Super Bowl contender or a team in rebuild mode?

The talent is certainly there, with players like Prescott, Elliott, Cooper, and a very good offensive line leading the way. If new coach Mike McCarthy can direct this roster in the right direction, it would be no surprise to see Dallas in the playoffs this season.

To win the Super Bowl, it’s no surprise to see Kansas City as the favorite with odds of +650. It also makes perfect sense that Baltimore (+700) and San Francisco (+900) trail closely behind.

But you don’t have to go much further before reaching the +1700 odds of the Cowboys. In fact, Dallas trails only New Orleans (+1200) and New England (+1400) in addition to those three frontrunners when it comes to odds of winning it all this season.

So, it’s fair to say Bryant would be joining a contender if the Cowboys can work some negotiation magic this offseason.