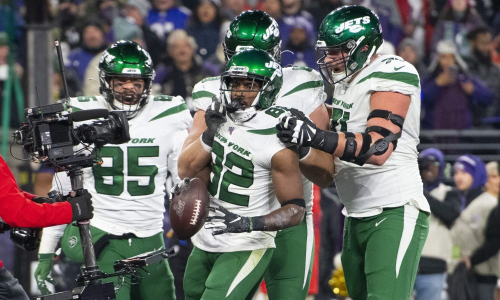 The New York Jets (0-9) will be heading to SoFi Stadium in Inglewood, California, USA, on Sunday the 22nd of November, to butt heads with the Los Angeles Chargers (2-7) in a Week 11 NFL matchup. The match will begin officially at 4:05 PM EST. The CBS TV Crew will be present to cover the match.

The NFL teams have been bidding on college football star quarterback Trevor Lawrence, and it seems the New York Jets might win the bid and sign Trevor Lawrence. For now, the New York Jets are coming off a bye week after their defeat to the New England Patriots. The Jets held on for quite long in the game but eventually lost, adding another loss to their season statistics and making it 9 straight losses this season.

Veteran QB, Joe Flacco, threw for 262 yards scoring 3 touchdowns against the Patriots, and running back Frank Gore led the run with 12 carries in 46 yards. In receiving yards, wide receiver Breshad Perriman led with 5 receptions in 101 yards, scoring 2 touchdowns. The team gained 322 total yards of offense, while the Patriots gained a total of 433 yards of offense against the Jets.

Sam Darnold is the lead quarterback for the Jets this season with 1,045 yards scoring 3 touchdowns with 6 interceptions. Meanwhile, lead rusher, Frank Gore, has rushed for 386 yards with 108 carries, and wide receiver, Jamison Crowder, has secured 31 catches in 406 yards.

The New York Jets offense has been ranked as the worst offense in the league tables, in both total and scoring offense. The team averages a poor 13.4 points per game and 266.0 yards total per game, 167.11 in passing yards, and a 98.89 average in rushing yards.

Meanwhile, in defense, the Jets have not done much better, ranking 30th in the NFL, allowing their opponents an average of 29.8 points per game. In yards allowed, the Jets average 409.4 total, 288.6 in passing yards, and 120.9 in rushing yards.

Justin Herbert and the LA Chargers Set for Victory

The Chargers, in their last game against the Miami Dolphins, lost 29-2, with Justin Herbert leading with 187 yards, 2 touchdowns, and 1 interception. Meanwhile, running back Kalen Ballage rushed for 68 yards with 18 carries, and wide receiver, Keenan Allen, caught 3 throws in 39 yards scoring 1 touchdown. The team accumulated 273 yards of offense against the Dolphins, not too far behind the Miami team, who gained 280 yards of offense.

QB J. Herbert has this season gained 2,333 yards in passing, scoring 19 touchdowns with 6 interceptions. While lead rusher J. Kelley has rushed with 98 carries for 313 yards and wide receiver K. Allen had made 65 catches in 690 yards with 5 touchdowns this season.

The New York Jets have been unimpressive this season, both on offense and defense, and they are currently looking to bring Trevor Lawrence into the fray to help things along. However, for the game on Sunday, we are uncertain how the team’s performance will pan out. Meanwhile, the Chargers’ defense has taken a blow in the loss of Joey Bosa but seems to be holding up just fine.