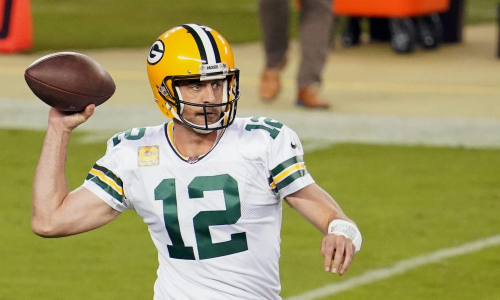 The Green Bay Packers come into Sunday’s 1 p.m. ET home contest against the Jacksonville Jaguars following an impressive victory at San Francisco, just four days after a close loss to Minnesota. The Packers (6-2) lead the NFC North and have the benefit of three extra days off after the 34-17 triumph over the 49ers on Nov. 5, and now play five of their next seven games at home. The Jaguars (1-7) are trending in the complete opposite direction, seeing their losing streak stretch to seven games after last week’s 27-25 home loss to Houston.

It was another stellar performance last week for Green Bay quarterback Aaron Rodgers, who ripped the 49ers for four touchdowns with no interceptions while completing 25-of-31 pass attempts. Since passing for just 160 yards and throwing his only two interceptions of the season in an Oct. 18 loss at Tampa Bay, Rodgers has completed 70.6 percent of his passes for 879 yards with 11 touchdowns in his past three games. Receiver Davante Adams recorded 10 receptions against San Francisco and on the season has caught eight of Rodgers’ 24 touchdown passes.

Only the winless Jets have endured a worse season to this point than the Jaguars, who have surrendered the fourth-most points in the NFL (247). But there was a glimmer of hope in last week’s defeat to Houston, as rookie quarterback Jake Luton was outstanding filling in starter Gardner Minshew II (sidelined with a thumb injury). Luton completed 26-of-38 pass attempts for 304 yards, one touchdown and one interception, and rushed for a score late in the fourth quarter.

FanDuel likes the Packers decisively, posting Green Bay as a 13.5 point home favorite with a moneyline of -950. Jacksonville has a moneyline of +640. The over/under for total points is 49.

The Packers are third in the NFL in scoring per game at 31.6, riding a balanced offense that ranks 12th in the league in both passing and rushing. Jacksonville is averaging 22.4 points per game (26th in the league), ranking 20th in passing and 28th in rushing.

Packers Offense on a Roll

Green Bay has scored 30 or more points in each of its six victories and has topped 400 yards of total offense five times, all the more impressive considering its offensive line has been riddled by injuries. Running back Aaron Jones is averaging five yards per carry on the season, and last week rushed for 58 yards while catching five passes.

Outside linebacker Za’Darius Smith leads Green Bay with seven sacks, recording a sack with a forced fumble and fumble recovery against San Francisco. Placekicker Mason Crosby is 11-for-11 on field-goal attempts, connecting on a 53-yarder last week.

Jaguars Must Shore Up Defense

Jacksonville’s defense has surrendered 32.4 points per game during its losing streak, giving up 30-plus points six times in that stretch. Middle linebacker Myles Jack registered 11 tackles and forced a fumble against Houston. Safety Josh Jones is second on the team with 61 tackles, but is questionable for Sunday with a chest injury.

Rookie running back James Robinson backed up his career-best 119 yards rushing against Las Vegas on Oct. 25 with 99 yards and a touchdown on 25 carries last week. Receiver DJ Chark caught seven passes for 146 yards a week ago, half that yardage coming on a 73-yard touchdown from Luton in the first quarter. Receiver Laviska Shenault Jr., second on the team with 30 receptions, won’t play due to a hamstring injury.

Stating the Obvious: Take Green Bay and the Over

Luton leading Jacksonville to victory in his first career road start would be a great story, but betting on it happening is quite risky. The Jaguars are en route to a top-three pick in the draft while the Packers look like a legitimate Super Bowl contender. With Green Bay back on track after Rodgers’ big day against the 49ers and three extra days of rest, take the over as the Packers cover the spread.