Jacksonville, San Francisco Both Aiming For Trades Ahead Of Draft 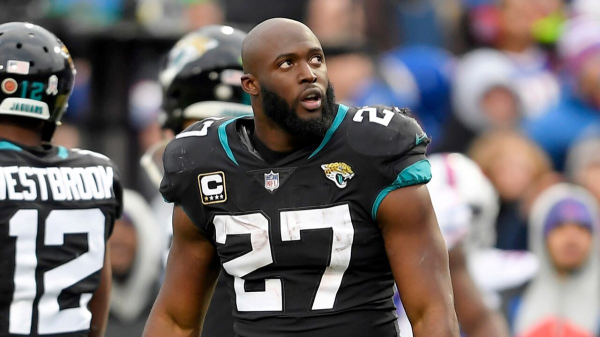 The most exciting NFL offseason activity is right around the corner, and some NFL teams are preparing by seeking out big-time trades. As we head into NFL Draft week, the Jaguars and 49ers have let the world know they’re open for business.

For San Francisco, the goal is to acquire more picks in a draft in which they don’t currently own a selection in the second, third, or fourth rounds. Those picks were previously traded for Kansas City’s Dee Ford (second) and Denver’s Emmanuel Sanders (third and fourth).

However, the 49ers have plenty of ammunition to pick up more draft spots after trading away defensive lineman DeForest Buckner for Indianapolis’ 13th overall selection last month.

San Francisco is now fielding calls for the 13th and 31st picks in Thursday’s draft, and are intent on trading one or both picks for additional draft capital.

In Jacksonville, running back Leonard Fournette is currently the subject of trade talks. According to reports, the Jags are aiming to cash in on the former first-round pick ahead of May 4, the deadline for the team to exercise its fifth-year option on the player.

The timing of placing Fournette on the trade block suggests the team may be looking to acquire draft picks in return for the running back, but they could also simply be seeking clarity on the Fournette situation, so they know whether or not to draft a young running back this week.

Fournette publicly noted he wanted the team to sign Cam Newton earlier this week, but it’s currently unclear whether that has anything to do with his presence on the trade block.

Why the Niners Have the Right Idea

First-round picks in the NFL Draft have the potential to become superstars as soon as they step on a professional football field. In addition to the potential, most casual fans place heightened importance on the opening round because that’s when the college football stars they’re familiar with get drafted.

However, San Francisco has the right idea by looking to turn at least one of those first-round picks into more selections.

Think back to the Dallas Cowboys dynasty in the 1990s. That entire run of championships was set up by a single trade when the Cowboys dealt star running back Herschel Walker to the Vikings in exchange for a slew of picks (seven) over three years.

Dallas used those picks, much of which came through rounds two and three, to build out a roster that would win them three Super Bowls.

The core of a championship roster is often acquired through the first half of the draft, and San Francisco is willing to trade away the potential for a star in the first round in exchange for the chance to add to its championship core.

San Francisco is currently the third favorite to win this year’s Super Bowl. With odds of +900, the Niners trail only Baltimore (+700) and Kansas City (+650).

Even casual fans of the NFL will likely know that Jacksonville had every right to be frustrated with Fournette after the fourth-overall pick in the 2017 draft struggled to stay on the field. Through his first two campaigns, Fournette missed 11 games.

At that point, seeking a trade would make perfect sense. However, Fournette had a big-time season in 2019. In addition to missing only a single game, Fournette rushed for 1,152 yards, caught 76 passes, and ranked sixth in the league in scrimmage yards (1,674).

Add a strong season to the fact that Fournette is still on his rookie deal — he’s owed $4.16 million in base salary this year — and the current timing of aiming to trade the running back away feels curious.

Are the Jags attempting to sell high after Fournette’s big year? Maybe.

Perhaps a better reason for aiming to deal Fournette is to acquire picks ahead of the NFL Draft, especially considering Jacksonville appears to be in rebuild mode. With odds of +16000 to win the Super Bowl this season, the Jaguars are dead last.