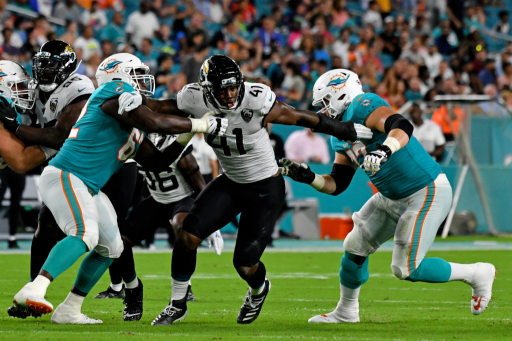 With their plucky play, it has been hard not to notice the Jacksonville Jaguars this season. A few weeks ago they were expected to be one of the worst teams in the league but they have been competing hard and getting results. They could easily be 2-0, which would have made all those holding 5 win futures tickets very happy.

Their Florida “rival“, the Dolphins, have not fared well at all. Last year they got blasted the first couple of weeks then recovered. This season they have been more competitive but are still seeking their first win of the season, it is not a good pattern. New England is no longer the beast of the AFC East but the Dolphins are still looking like the lightest team in the division.

WR Dede Westbrook – Probable – Has not played this season. Cluster injuries can kill a team so they need him.

K Josh Lambo – Quesionable – Kickers matter, especially if you are going to find yourself in close games, which Jacksonville is likely to do.

WR Davante Parker – Questionable – Their top receiver, and number two is far behind.

CB Byron Jones – Doubtful – Big free agent acquisition who they are going to let heal. They have too much invested in him.

This one has already moved a lot. It started as a pick’em and now the Jags are the decisive favourite at home. Prior to the season I think that Miami would have been favoured, that is how much things have changed. Even though Jacksonville has been more competitive that does not make them a good team. I think this move is as much about Miami not looking like much and suffering from significant injuries. Losing Byron Jones is tough. He was one of those guys who could just go out and make a play when you needed it. Jacksonville does not have elite receivers so it won’t kill Miami in this matchup but it changes they way they are going to have to play and it is not like they were great with him. It will be interesting to see how Jacksonville plays in a favourite role. I might have faded them here, but trusting Miami is hard to do.

This is Jacksonville so of course an upset it possible and maybe even probable, but from what we have seen it is going to take a team better than Miami to bring down the Jags. I am not sure that if both teams are mistake free that Jacksonville is not the better team. It certainly looks like it so far. Miami will be a popular money line play but the Jags are the call here. That price is not great but throw it in with some other faves and it adds up quick.

Both of Jacksonville’s games have gone over this season while Miami is 1-1 O/U. The Jags have been scoring way more than anticipated to the extent that those games were lined in the 44s but we are seeing this one a field goal higher even though their are key receivers on both sides that are injured. It is a small sample size but I am getting more comfortable with the Jags being at least a moderate scoring team. They trust Minshew a lot and his errors are ones of trying to make plays not being careless. One thing we haven’t seen is how this team plays with a lead though. I worry that the coach might get conservative there, trying to preserve the win. That will suppress the scoring.