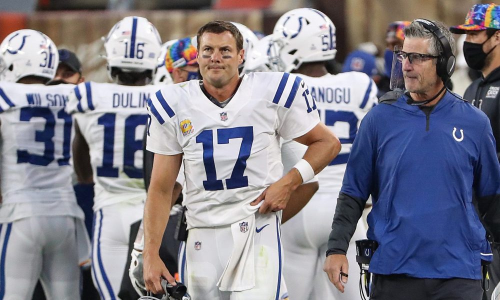 This is an important AFC South matchup, especially for Indianapolis who got thumped last week by now division leading Tennessee. Though I was high on the Titans a week ago, I never imagined they would put their foot on the throat of the Colts the way they did. Indy has to rebound quickly in a very competitive AFC. Oddly, they will be playing the Texans twice in the next three weeks. They had a similar scheduling set up against Tennessee recently, winning the first game and then losing the second game.

Houston is playing its best ball for interim coach Romeo Crenel. However, it is a little too late it seems, as the hole they dug early on is the reason he got the gig in the first place. Houston took a hit when top receiver Will Fuller was suspended for PEDs. It was nice that he explained the situation on social media but that won’t help Deshaun Watson on Sunday. Neither will the fact that Houston can’t run the ball. Watson can sometimes put the team on his back though and might need to to keep this one close.

The Colts are off a loss and the Texans off a win so this could be a buying opportunity depending on which side you like. I do not buy into the Colts being a threat in the playoffs, but during this regular season they have proven to be a tough out, primarily due to a strong defense. Houston doesn’t run the ball well and Indy should be able to keep that facet of their game in check without having to overcommit. As long as Philip Rivers doesn’t turn the ball over the Colts should be able to get enough points on the board to get the win. Watson, even without Fuller has enough to make us sweat this one, but when they need more than field goal late he is not able to get it done. A professional performance by the Colts gets the victory.

In his short career Watson certainly has had a flair for the dramatic. Playing shorthanded, at home, and against a division foe certainly offers opportunity for a supreme performance in leading the Texans lead to victory, but I am not seeing it. Houston may have won three of their last four game, though a quick glance shows that none have come against a winning opponent. They have not beaten an opponent with a winning record all season. This is not going to be the first one.

Both of these teams have more overs on the season. Indy has been on a major over kick, going over the total in six of their last seven games. During that time we have seen a gradual increase in their scoring, which is now 9th in the NFL, and defensive regression too, they are 9th in scoring defense too. Houston is a bad defensive team, giving up 27 points per game. I see the Colts topping that here, moving the ball methodically while Watson creates some quick strikes in bringing them back within range. It isn’t enough to cover but more than enough to add another over to the Colts coffers.