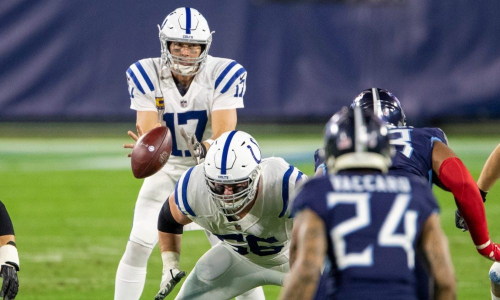 I am still trying to figure out just how good this Indianapolis Colts team can be. They seem to be a classic “more than the sum of their parts” group as opposed to a collection of star players, not that there is anything wrong with that. The one thing we know for sure is that they have one of the best defensive teams in the NFL. That alone just might win them a division title.

Green Bay got the win last week, but things were a little tighter against Jacksonville than expected. There is no great cause for alarm, these things happen, even to the better teams. I wouldn’t think the Packers were looking ahead to Indianapolis more likely just beyond the Jaguars.

This is not a conference game, but it will mean a lot to the standings nevertheless. It is a nice battle between a team that has been winning primarily with offense and another whose defense leads the way. Green Bay is third in the league in scoring and that is a big reason they are 4-1 SUATS on the road this season. There is not a more savvy decision maker in the league than QB Aaron Rodgers and you never know which receiver he is going to feature, which makes them a really tough team to defend. This will be the third time all season the Packers are underdogs, they are 2-0 SUATS in those games so far.

Indy was a steal last week, winning by 17 as a one point favorite. It was easy to downgrade the Colts heading into last week after they got humbled by Baltimore the week before, regency bias might have them overrated this weekend though. Prior to the win over Baltimore I think it was assumed that the Colts were a team that only plays well against light competition. That was definitely not the case last week, where the offense and defense both had strong games, in the same game. I am not sold on the offensive potential of the Colts because I am not a believer in Philip Rivers, but the defense is very real. This game should be close and if you think you are going to get a lone score game it is hard not to like getting some points.

I am still not sure where the Packers fit in the pecking order of the league right now, however, I am sure that with Aaron Rodgers at the helm, there is no team they can’t compete with and beat. Therefore, I like them a lot on the money line this week. Green Bay does not have the defense that Indianapolis does but their offense is much better, and it is not just Rodgers. In this one I like the formula of Rodgers staking them to a lead followed by Green Bay pounding away with RB Aaron Jones thereafter. They can also play catchup too, if they have to, because Rodgers is enjoying his best season in years. I love Green Bay at this price and if the spread moves closer to -3 we might get even more value.

We have seen some movement on this total as it opened at 49.5 in most places. I think that movement coincides with the handicaps above as any increases in expected scoring is because the oddsmakers like the chances of Green Bay moving the ball and scoring against one of the better defenses in the league. Both of these teams are 5-4 O/U on the season. The Colts have gone over in four of their last five, with all of those totals in the 40s. In fact, they have not had a game lined in the 50s this season before this week. Green Bay has had their last three games lined in the 40s, and gone over twice, so maybe those recent results are moving this total up too. Lastly, it looks like sharp money has bet this number up as that is what we generally see early in the week. Now that we are at this number I like the under a little more but will wait and see if the public pushes it even higher between now and kickoff. They tend to bet favorites and overs and this will be a game of some interest.