If Cam Newton Injury Is For Real, How Much Trouble For The Panthers? 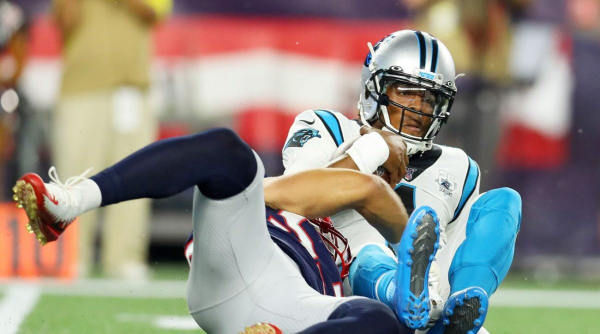 On Thursday night, the Carolina Panthers faced off against the New England Patriots in a preseason matchup. Everything was going the same way any preseason game goes until the Panthers’ biggest fear became a reality. The Patriots sacked quarterback Cam Newton, and he seemed to be injured.

Newton exited in the first quarter with what turned out to be a sprain in his foot. The star quarterback has faced injury problems recently as he underwent shoulder surgery in the offseason.

Newton was the MVP of the league during the 2015 season and led his team to Super Bowl 50. They ended up falling short to the Broncos as they lost 24-10.

As with most quarterbacks in the NFL, Newton is an essential piece for his team. The Panthers’ success depends on him, and they hope this injury doesn’t force him to miss any time in the regular season.

Newton’s current contract has him making just over $20 million a year. When he received the deal, he was one of the highest-paid QBs in the NFL, but with salary demands rising every year, he has fallen to the middle of the pack.

With Cam’s contract only having a few years left, he will certainly be striving to stay healthy so that he can prove his worth for another big contract. He is the face of the franchise, and both sides are well aware of this.

Last season, Newton played in 14 games and posted a 6-8 record. This wasn’t a great result compared to his 11-5 record in 2017. He threw for 24 TDs and 13 interceptions. Having your interception total be half of the number of touchdowns you threw is never a feat you want to carry with you.

The 2015 MVP is looking to have a bounce-back year this season, but first, he has to get healthy. Newton is currently expected to start in Week 1 of the regular season, but this won’t be official until the time gets closer.

Having these expectations is really the best-case scenario for Carolina. After seeing their franchise superstar leaving Thursday’s game in a boot, it’s likely that the organization and fans were expecting the worst.

Can The Panthers Survive Without Newton?

Assuming that the injury is worse than the team thinks, they would have to lean on backup quarterback Kyle Allen. Allen played in two games last season and had a 64.5 percent completion rate with two touchdowns and zero interceptions.

The numbers that Allen was able to post in the only two games that he’s played in the NFL are actually relatively impressive. Now, he only started in one of those two games, so his sample size has been very small.

While the Panthers are sure to be in trouble if Cam is forced to miss time, at least backup QB Allen has shown somewhat promising potential in the little amount of time that he has played.

The Panthers have a tough opening matchup against a Rams team that fell short to the Patriots in the Super Bowl last season. As we get closer to game day, we’ll have a better idea of how serious this injury really is, but as of now, expect Newton to get the nod in Week 1.