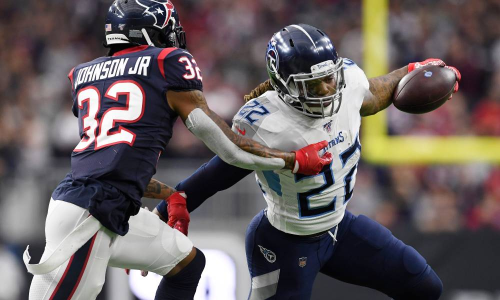 This is a division battle. Houston has won four of the last five AFC South titles, but Tennessee is a perfect 4-0 and looking to keep the good times rolling after beating Buffalo on Tuesday night. Lots of on the field and off the field intrigue for this one – coaching changes, COVID, etc.

Houston finally got their first win of the season last week. They beat up Jacksonville in the first game after jettisoning their coach, Bill O’Brien. Replacing him with Romeo Crennel was hardly an inspired move though, as the old coach has not had much success in the top spot over the years. However, I guess there is something to be said about making a change when things just aren’t working.

There are still some things to like about this Texans team, most notably QB Deshaun Watson, who has three straight games with a rating over 100. If they can win at Tennessee things do get a little interesting for Houston going forward.

Tennessee is playing on Sunday after playing on a rare Tuesday night. They whipped the Bills pretty good, but there is overwhelming evidence that playing on a short week is a disadvantage. In beating Buffalo a couple of things stood out. The first was a defense that really limited the Bills. Buffalo was averaging 30ppg and was held to just 16. The Titans made QB Josh Allen look very ordinary and that bodes well because he and Watson are very similar quarterbacks. The other thing that stood out was their own quarterback Ryan Tannehill. He seems to have complete mastery of the offense right now and the team is thriving.

It is no surprise that this number has moved from its -2.5 opener to 3. Tennessee is a good team and most saw them lay waste to Buffalo on Tuesday night. When that happens the number move pretty quickly and that 2.5 might have been light even before game time, though I guess we would not have known how Tennessee was managing its COVID no practice situation then. At this number I think the play has to be the Titans. Per the above, preparation time is a critical element, but there is no travel and I think schematically they can do a lot of the things against Watson that they did against Buffalo. Houston also has the second worst rushing defense in the league so even though RB Derrick Henry was not much of a factor against Buffalo, I expect he will be in this game. Grab this number while it is still there.

This number corresponds well with the line above. I am not seeing any way to pay this other than with the favoured Titans. It was a nice show that the Texans won their first game with their new coach, but they were at home and favoured in that contest. The fact that they were favoured showed just how much the markets felt they were due. Usually new coaches get an initial bump in what is normally an underdog role. Having to wait a week for that will not capture the same emotion. Plus, I am not buying any schematic brilliance from the Houston staff. Tennessee will have to make mistakes to lose and I am just not seeing it.

Even though the Titans exploded for 42 points on Tuesday the total has come down from its opener of 55. That data point of 42 is an outlier for a team that wants to play ball control and pound the rock late. Tennessee is 3-1 O/U this season, but prior to Buffalo, all of those games had been lined in the 40s. 52 against the Bills was the highest of the season and that opening number of 55 would have been even higher. I think this game will be a little more plodding. Tennessee was helped out by Josh Allen’s mistakes on Tuesday and maybe Watson does the same, but this seems like the right time to expect a more typical Tennessee grinder.