Harrison Hints At Receiving Bounty From Tomlin For Big Hit 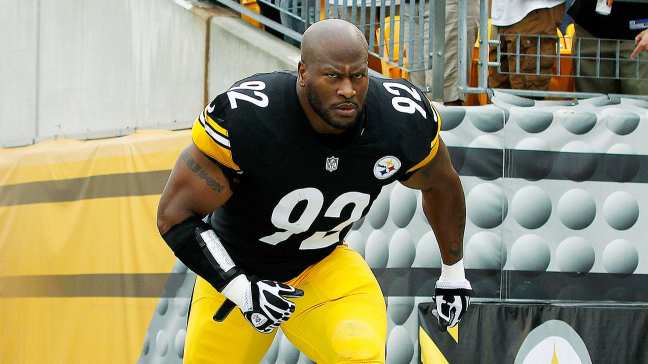 Of all the big hits in NFL history, one that sticks with many fans of the sport is former Steelers defensive star James Harrison’s hit on Browns receiver Mohamed Massaquoi in 2010. As a repeat offender, Harrison was originally fined $75,000 for the hit — later reduced to $50,000 — but he may have had some help paying the fine.

The heavy fine imposed for the hit, which was not flagged during the game, came as a result of Harrison already having been fined for unnecessary roughness earlier in the season.

“Listen, on everything I love, on my daddy’s grave, I hit that man with about 50 percent of what I had, and I just hit him because I wanted him to let loose of the ball,” Harrison said. “If I had knew they was gonna fine me $75,000, I would have tried to kill him.”

Steelers president Art Rooney II is skeptical Tomlin ever offered Harrison a “Bountygate”-style reward. “I am very certain nothing like this ever happened,” Rooney said. “I have no idea why James would make a comment like this, but there is simply no basis for believing anything like this.”

Harrison’s comments are particularly worrisome for Rooney and the Steelers because of how the NFL handed down discipline for the Saints’ “Bountygate” scandal in which players were offered cash for delivering big hits and injuring other players.

While speaking with Baltimore’s 105.7 The Fan, Payton noted that he doesn’t expect a similar response from the NFL this time. “That’ll be something that’s tucked away or under the rug at Park Avenue,” Payton said. “They’ll look into it briefly.”

Payton added that fans “shouldn’t hold their breath” if they’re expecting the league to investigate the possibility of a “bounty” system in Pittsburgh in 2010.

Payton went on to hint at unfairness regarding the NFL’s handling of the Saints’ “Bountygate” scandal. “Listen, don’t get me started on that,” Payton said. “I lost $6 million in salary. And honestly it was something that I’ll never truly get over because I know how it was handled and how it was run and the reasons behind it. And that’s just the truth.”

In the same interview, Payton touched on the league’s pass interference review policy, which was instituted last season, saying the NFL wasn’t ready for it. “I think the theory behind what the league voted on certainly had a chance to be successful,” Payton said. “But quite honestly, we weren’t ready in New York to handle it.”

Both Payton and Tomlin are two of the longest-tenured coaches in the NFL, and both expect to lead their respective teams to the postseason with an eye on making a Super Bowl run.

Pittsburgh has the tougher task of the two. In the AFC North, the Steelers will have to compete with the Browns and Ravens. While Pittsburgh’s +340 odds of winning the division are ahead of Cleveland’s +480 odds, they trail Baltimore’s -200 odds.

The Steelers will also have to find a way past the Chiefs and Ravens — the two Super Bowl favorites — if they’re going to win the AFC Championship. At +1200, Pittsburgh is the AFC’s fifth favorite.

Although the Saints are the favorite to win the NFC South with odds of -110, they’ll have to deal with Tom Brady’s Buccaneers, which own +160 odds of winning the division.