Green Bay Trades Up To Draft Love; Is He Rodgers’ Heir Apparent? 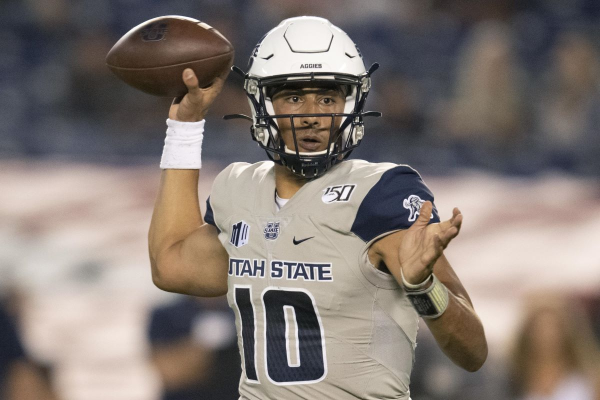 Draft night always comes with a flurry of surprises, and Thursday’s first round was certainly no exception. Yet one stood out among the rest, as Green Bay traded up late in the opening round to select Utah State’s Jordan Love, something of a Cinderella quarterback.

If the Packers were able to stay put at No. 30 and get Love, perhaps only a few eyes would have batted. Yet Green Bay parted with its first-round pick and a fourth-rounder in exchange for Miami’s No. 26 overall selection to take Love, sparking memories of Green Bay’s drafting of Aaron Rodgers.

Green Bay hasn’t used a first-round selection on an offensive skill position player since 2005 when they drafted Rodgers. At the time, starting quarterback Brett Favre was 35 years old. It was clear that Rodgers was drafted to be Favre’s heir, and it sparked a tense relationship in the QB room.

Although he’s under contract through 2023, Rodgers is now 36 years old, and history feels like it’s repeating itself with Love serving as the new heir apparent.

Green Bay general manager Brian Gutekunst addressed the surprise selection, saying, “The way the board fell, this was the best decision for the Packers.”

Actions certainly speak louder than words, but Gutekunst and Rodgers are saying all the right things at this point.

Before the draft, Rodgers spoke to the potential for Green Bay to draft a quarterback. “We’ve drafted various guys over the years,” Rodgers said. “I understand the business and the nature of it, obviously love to bring guys in that are going to be able to play and compete right away. I understand it’s a business. I wouldn’t have a problem.”

After selecting Love, Gutekunst reiterated his support for Rodgers. “We’ve got the best quarterback in the National Football League, and we plan to have him for a while competing for championships,” he said.

However, it’s also clear that Gutekunst didn’t consult Rodgers before making the pick, and Rodgers has no intention of letting someone take his spot.

“I haven’t connected with Aaron yet, but he’s obviously been through this, and he’s a pro,” Gutekunst said of speaking with Rodgers about Green Bay’s first-round pick.

Prior to the draft, Rodgers said, “I still feel like I have a ton of years left playing at a high level. I’m confident enough. I’ve always felt like it doesn’t matter who you bring in; they’re not going be able to beat me out anytime soon. I feel really confident about my abilities and my plays.”

Is this another Favre-Rodgers situation? Only time will tell.

Did Packers Whiff By Not Giving Rodgers Help?

The decision to take a quarterback in the first round of the draft wasn’t just a curious one because Green Bay already has one of the best QBs in football. It was also surprising because the Packers were just a single win away from reaching the Super Bowl a year ago.

For a team that feels incredibly close to another Lombardi Trophy, utilizing that No. 26 pick on someone who could make an impact from Day One may have put Green Bay over the hump. Yet Love will likely sit on the bench all year, unable to help the Packers improve upon last season.

“I know a lot of people will look at this as not a move for the immediate, and I understand that but the balance of the immediate and the long term is something that I have to consider, and that’s why we did it,” Gutekunst said.