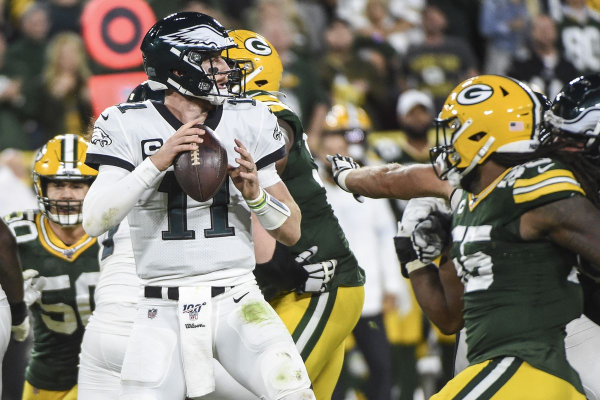 The Green Bay Packers (8-3) look to stay in the hunt for the 1-seed in the NFC while the Philadelphia Eagles (3-7-1), try to end a three-game skid. This Week 13 late afternoon game will be played at historic Lambeau Field on December 6th.

Can Aaron Rodgers keep pace in the MVP race?

Coming off his fifth 4-touchdown performance this season, the 2-time NFL MVP looks to continue his extraordinary season under second year head coach, Matt Lafleur. Rodgers is in the thick of the MVP race, leading the NFL in touchdowns passes and Quarterback Rating. Rodgers has thrown 33 touchdowns to just 4 interceptions through 11 games so far this season, leading the Packers to a substantial three game lead in the NFC North.

Green Bay is coming off a thumping of division rival Chicago Bears on Sunday night, winning 41-25. Rodgers and the Packers will look to avenge last season’s loss to the Eagles, their only loss at home during a 13-3 campaign.

Can Carson Wentz turn it around in Philly?

The Eagles quarterback has struggled mightily this season, and apparently, admitted so in front of the locker room, addressing the entire team this week. Wentz took accountability for his poor play this season after looking woeful, again, in the Monday night loss to the Seattle Seahawks. Wentz threw his league leading 15th interception and was sacked 6 times against the spotty Seahawk defense. Jalen Hurts played his first snap of his career without Wentz on the field, but only logged one other snap, perhaps signaling he is not ready to seriously compete for the starting job.

On the other side of the ball, the Eagles defense faired well against the 3rd highest scoring offense in the League, for the most part. Cornerback Darius Slay, however, struggled in his matchup with Seattle receiver DK Metcalfe, who amassed 177 yards on 10 catches. Slay will need to rebound quickly for another matchup with one of the NFL’s best receivers, Davante Adams.

The Packers will be without their starting center, Corey Linsley, who suffered a knee injury last week. Starting Left Guard, Elgton Jenkins, will bump down to center, and Rookie Jon Runyan is in line to make his first NFL start at Left Guard. Another injury to watch for the Packers is Linebacker Za’Darius Smith, who did not practice Friday with an ankle injury and is listed as Questionable for Sunday.

The Eagles expect to get a boost to their interior defensive line as DT Fletcher Cox returned to the field Friday. Tight End Zach Ertz was activated off the IR and will also return after missing the last five games. The big injury to watch will be that of the aforementioned, Darius Slay, who has been limited by a calf injury, and is Questionable for the game.

The Eagles have dropped three games in a row, yet they still find themselves only a half game out of first place in the NFC East. For a 3-win team in Week 13, they still have a lot to play for, and I expect their defense to continue their solid play. The Eagles have the second-best pass-rushing defense in the league, and I expect them to give the Packers’ beat up offensive line some trouble early. However, Rodgers and Adams will be able to get enough going, and force Wentz and the Eagles offense to play from behind, a spot that benefits the Packers’ defensively. The Packers offense will continue to stay hot, and they should win comfortably at home. Packers 31, Eagles 20