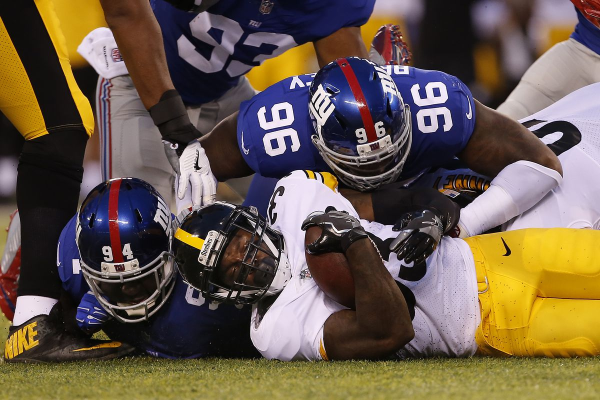 That the Pittsburgh Steelers finished 8-8 last season without starting quarterback Ben Roethlisberger playing beyond week 2 was a minor miracle. Now that Roethlisberger is back, the Steelers have high hopes of returning to the playoffs as they have virtually every season of Roethlisberger’s career.

Their first test will be a Monday night road game against the New York Giants and rookie head coach Joe Judge. The Giants will counter the Steelers’ veteran quarterback with second-year pro Daniel Jones, who took over last season as the full-time starter for two-time Super Bowl champion Eli Manning.

Kickoff is scheduled for 7:15 p.m. ET at Metlife Stadium in East Rutherford, N.J.

There was a drastic difference in the opening point spread at DraftKings and FanDuel. FanDuel opened it at Steelers -3.5, but DraftKings listed Pittsburgh as a 6-point favorite.

FanDuel’s line has moved to Steelers -5.5 as of Saturday afternoon. DraftKings’ spread is still sitting at -6.

The total opened at 47.5 on FanDuel and has come down to 45.5. DraftKings opened the total at 46, and that number remains as of Friday afternoon.

Several trends stand out for this one, including two that drastically go against the Giants. New York is 1-10 against the spread (ATS) in its last 11 games as a home underdog. Comparatively speaking, the Giants are also 3-12-1 ATS in their last 16 home games.

Monitor the status of Giants wide receiver Golden Tate over the weekend. He was dealing with a hamstring injury early in the week and was listed as a limited participant in practice on Thursday and Friday. Several reports suggest he is expected to play, but hamstring injuries can be tricky. The Steelers have a stout defense, so the Giants need plenty of healthy pass catchers.

Pittsburgh got good news about one of its wide receivers Friday when Diontae Johnson (foot) returned to full participation in practice. The Steelers do expect to be without starting right guard David DeCastro (knee). He has been dealing with the injury for two weeks and did not return to practice on Friday.

FanDuel has yardage props for various players. Here are several to consider.

Giants QB Daniel Jones (over/under 226.5 passing yards): Jones eclipsed this mark in six of his 15 starts last year, including the last three of the regular season. Against top defenses Minnesota and New England in his third and fourth starts, he had 182 yards and 161 yards.

With Roethlisberger under center, the Steelers have been one of the best teams in the NFL on a consistent basis. His experience and success are unmatched by most of the other quarterbacks in the league. Pittsburgh will have an extra hop in its step knowing it has its QB1 back on the field to go with its dominant defense.

The Giants, on the other hand, are trying to climb out of a hole that has seen them miss the playoffs seven times in the last eight seasons. New head coach Joe Judge is tasked with that challenge, but you have to wonder how much of a difference he can make in a shortened training camp and no preseason games to work with.

We strongly recommend a bet on the Steelers -6.