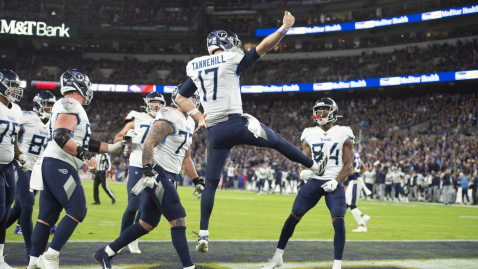 This week, the Jacksonville Jaguars travel to Tennessee to take on the Titans at 1 p.m. ET.

Both teams are coming off week one victories and look to remain undefeated. The Titans are favored to come out on top by 7.5 points over the Jaguars.

The Jaguars beat the Indianapolis Colts by a touchdown, 27-20, last week in a close game. Gardner Minshew looked up to the task as he was nearly perfect in terms of completion percentage, finishing the game 19/20 with three touchdowns. Although the Jaguars didn’t put up too many yards on offense, they were moving the ball effectively and efficiently. James Robinson led the way for them on the ground with 62 yards on 16 carries.

On the other side of the ball, the Jaguars gave up 445 yards of total offense but managed to slow up the Indianapolis attack as they neared the redzone. The Colts never punted once but still managed to only score 20 points, the Jaguars showed a bend but don’t break mentality. This could prove to be an issue though if the Titans find a way to capitalize in the redzone on their drives. The Colts managed 88 yards by committee rushing on the Jaguar defense so expect for the Titans to give Derrick Henry his weekly workload of carries.

The Titans are also coming off of a week one victory, theirs against the Denver Broncos. Titans quarterback Ryan Tannehill threw the ball 43 times in this win so look for him to do so again as the Colts managed to convert 17 first downs on the Jaguars defense through the air. He had the highest passer rating amongst quarterbacks in the league last season so the Titans are more than comfortable with putting the game in his hands. The Jaguars defense has also been giving up a lot of yardage through the air, dating back to last season, and they did so again in week one to Phillip Rivers. (363 yards)

The Titans defense gave up 323 yards of total offense to the Broncos and held them to only 14 points. The Jaguars can effectively score without putting up high yardage though, as they did so with 27 points last week. This could be something to keep an eye on. Star pass rusher Jadeveon Clowney is just getting acquainted with his new team as well, could this be the first week he has a monster performance for Tennessee? If the Jaguars fail to establish the run, look for Mike Vrabel to dial up some packages and blitzes for Clowney to show off his skillset and put pressure on Minshew.

One factor to keep in mind for this matchup is how you think Titans kicker Stephen Gostkowski will bounce back from his terrible week one performance. He ended up sealing the deal for the Titans with a late game field goal but managed to miss his 3 prior attempts as well as an extra point. The Titans would have never been in the position they were in if he had converted earlier in the game. If he continues to perform poorly this week, look for the Titans to possibly take some chances on 4th down.

Another factor to consider is the Jaguars rushing attack, we still have not seen enough to know how they will fare without Leonard Fournette. Who will be the guy to step up and be productive? If the Titans are successful in stopping the run consistently, look for the Jaguars to turn to Minshew to come up with some big plays for them through the air with his arm.

This is shaping up to be a good matchup, check out the odds below;