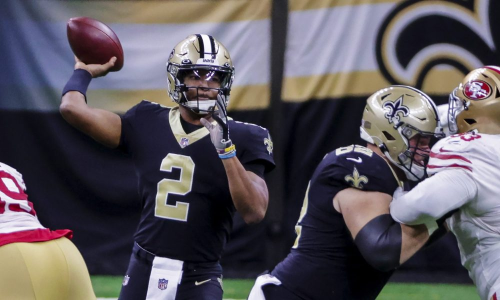 On Sunday, November 22, the New Orleans Saints (7-2) will take on the Atlanta Falcons (3-6) at the Mercedes-Benz Superdome, New Orleans, Louisiana. The match would be broadcasted at 1:00 PM EST on FOX.

The New Orleans Saints will stay home in Week 11 of the football season, for the second week consecutively, to take on the visiting Atlanta Falcons. After stringing together back to back wins, the Falcons are coming off their bye week, while the Saints took down a dismantled 49er team their last game out by 27-17.

Raheem Morris to the rescue

After a poor start to the season, Atlanta will enter this game against the Saints with a 3-6 record. The Falcons are 3-1 under interim head coach Raheem Morris and have looked like an entirely different team since their 0-5 start.

Matt Ryan has been playing excellently well over the past 5 weeks since Raheem Morris took over the play-calling. For 1274 yards, Ryan completed 107 of 147 passes to go along with an 8:2 touchdown to interception ratio. Over that period, he also has a rushing score to his credit.

After they had missed the last game before the bye, the Falcons hope that WR Calvin Ridley will be well enough to return from a foot injury for this game. This season, Ridley has emerged as the number one wide receiver for the Atlanta offense. He has racked up 657 yards and six touchdowns to lead the Falcons in both stats this season.

For a total of 11 touchdowns, the running offense for the Falcons succeeded in having 961 yards on 260 carries. Atlanta was able to get 14 sacks defensively and picked the enemy off 7 times.

The Atlanta Falcons has some players whose availability for the New Orleans Saints fixture is questionable due to injuries, including WR Calvin (foot) and LB Dante Fowler (Covid-19, Hamstring).

Will the New Orleans Saints Triumph without Drew Brees?

After their victory over the 49er last week, the Saints now have the best NFC record. Drew Brees was knocked out of Sunday’s game and will miss a decent amount of time with a rib injury, just as New Orleans felt all was falling into place for them after a sluggish start.

In Brees’ absence, Sean Peyton will turn to Jameis Winston, who will be making his first start of the season, to step in and try to retain their top spot in the NFC South. Winston saw little action against the 49ers in the second half of the game and was not expected to do much because when he took over, they had a 10-point lead. Winston was very volatile last season for the Tampa offense, and hopefully, he will fit in with Sean Peyton’s plan.

Furthermore, for the fourth consecutive season, New Orleans has gotten off to at least a 7-2 start. And for the fourth straight season, they are in the midst of a six-game winning streak, and ultimately the sixth team in NFL history to do that.

With two recovered fumbles on special terms leading to two touchdowns by RB Alvin Kamara, the team won the turnover battle 4-2. The New Orleans run defense surrendered only 49 yards on 25 carries (2.0 avg.), as they set an NFL record for the 52nd consecutive regular-season/postseason game by keeping individual rushers under 100 yards.

On the offensive side, by running for 115 yards on 29 carries, New Orleans overcame QB Drew Brees’ halftime defeat. Kamara rushed for two scores and also led the team with an extra touchdown in receiving with seven receptions for 83 yards (11.9 avg.). For a game-high 57 yards, Latavius Murray served nine times, serving as the closer in the second half, with eight carries for 52 yards in the final two quarters.

The New Orleans Saints will be without the following players due to injuries, QB Drew Brees (ribs) and WR Tre’Quan (head).

While the Falcons seem to be on a path of finding their groove back, we see the New Orleans Saints having the upper hand in this game, even without Drew Brees on the lineup.