Falcons Defense In For A Long Day Against Buccaneers Pass Attack 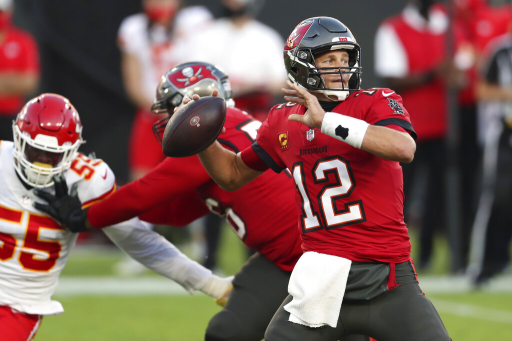 The Buccaneers and Falcons will face each other twice over the last three weeks of the NFL season, starting with a Week 15 matchup set to take place Mercedes-Benz Stadium in Atlanta. This will be the first time Tom Brady will face the Falcons as a Buccaneer and the second time he’ll face them since Super Bowl 51. He has a career record of 6-0 SU and ATS against the Falcons.

The Bucs are set as 6.5-point favorites at FanDuel this weekend.

Bucs WRs set to have a field day against the Falcons

If the first fourteen weeks of the NFL season has shown us anything about the Buccaneers, it’s that they struggle when they face strong pass defenses and teams who can rush the quarterback. Three of their five losses this season have come to the Saints (twice) and the Rams. It’s no coincidence that they rank first and fourth in opponent passing yards per game. Their other two losses, the Packers and the Bears, rank in the top half in that statistic as well.

They won’t need to worry about that this weekend as the Falcons rank third last in the NFL in opponent passing yards per game and fourth last in opponent yards per pass attempt. Tom Brady and the Buccaneers receivers should move the ball down the field at will against this young Falcons secondary.

No team in the NFL has had the red zone issues that the Atlanta Falcons have had this season. Some teams struggle inside the twenty-yard line on offense, some teams struggle in that area on defense, but no team struggles in the red zone on both sides of the ball like the Falcons. They rank second-last in red zone offense and fourth last in red zone defense. They are one of just two teams this season to score a touchdown on fewer than half their red zone possessions.

The Bucs, on the other hand, rank sixth in red zone offense and sixteenth in red zone defense. While not exactly the best team in the league in that category, they’re head and shoulders above the Falcons.

Now that we are in the final stretch of the season, we have a good idea of what teams do well and what teams do poorly. Looking at the stylistic matchups between teams to find out how much success they’ll have against one another becomes key when placing late-season NFL bets.

It’s clear that the Buccaneers have an advantage through the air and in the red zone and the Falcons don’t have any area where they thrive. The games in which the Falcons offense has clicked are games where Matt Ryan has had time to throw the football. Those games have been few and far between as they allow an average of 2.5 sacks per game, the tenth highest rate in the NFL. This weekend they’re facing a Buccaneers defense that ranks fifth in sacks per game so don’t expect Matt Ryan to have much time in the pocket.

Tom Brady has had fantastic success against the Falcons throughout his career and expects that to continue on Sunday afternoon.