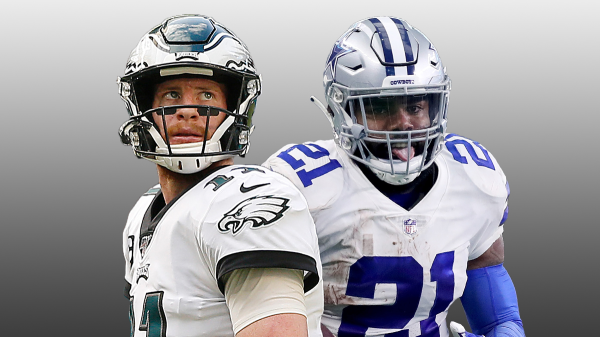 At the start of the NFL season, the NFC East was expected to come down to the Dallas Cowboys and Philadelphia Eagles. However, there is a good chance that both teams could enter Week 17 already eliminated from division title contention.

Coming into their Week 16 showdown in Dallas, which kicks off at 4:25 pm ET/3:25 pm CT Sunday on Fox, the 5-9 Cowboys and 4-9-1 Eagles will be hoping that 6-8 Washington, who leads the division, loses against Carolina at home to keep the division-wide open heading into the final week of regular-season action.

Neither team would have envisioned being in this position, but which team will win to potentially keep themselves in the division title race going into the final week of the regular season?

It’s been a tough season for the Eagles from the outset, as they did not register their first win until Week4 and won only one of their first six games. They did win two in a row to find themselves atop the NFC East at the halfway point of the season, but the wheels fell off at that point. A four-game losing streak coincided with New York and Washington both going on win streaks, which sent the Eagles tumbling down the division standings and brought about a change at quarterback.

Carson’s Wentz demotion came about after rookie Jalen Hurts replaced him during a Week 13 loss to Green Bay. Hurts led the Eagles to an impressive win over the Saints in his first start two weeks ago, and he amassed over 400 total yards and four touchdowns last week in a 33-26 loss to Arizona. There are still plenty of questions to be answered about Hurts’s accuracy as a passer, but Wentz’s future in Philadelphia certainly appears to be under threat now.

That would be understandable, given that an offense led by a quarterback with an eight-figure contract would be expected to be one of the better passing offenses in the league. Instead, the Eagles are 27th in total yards (332.9), 27th in passing yards per game (207.4), and third in interceptions thrown (16). They do rank tenth in rushing yards per game at 125.6, led by second-year back Miles Sanders, who has run for 810 yards and five touchdowns and averages 5.4 yards per carry.

Defensively, the Eagles are tied for 21st in the league in points allowed per game (25.8) and are 20th in total yards allowed per game (360.6). Last week against Arizona, they forced three turnovers but allowed 526 yards, including a career-high 406 passing yards by Kyler Murray.

Inexplicably, Dallas is somehow still in the NFC East race, despite being atrocious defensively while Dak Prescott was still on the field and inept offensively for a good portion of the time since he has been sidelined.

But after sitting at 3-9 a few weeks ago, the Cowboys have finally woken up just in time to inject themselves into the thick of things. After registering only their second road win of the season at Cincinnati two weeks ago, the Cowboys outlasted the 49ers 41-33 last week to move to 5-9 and keep their slim division hopes alive.

Due to losing both games against Washington, Dallas needs a lot to happen in order to win the division, but to even be in this position is notable given just how bad they have been for much of the season.

The offense has still not been productive, but Andy Dalton has been efficient in his last two starts, throwing four touchdown passes and no interceptions. And the defense, which has been awful on a regular basis this season, forced seven turnovers against Cincinnati and San Francisco.

Dallas total points over 24.5 (-106): This perhaps seems like a real risk, given that the Cowboys are not exactly firing on all cylinders offensively. But the Cowboys have found a way to put points on the board in recent weeks, and the numbers and recent performances line up well for this one to be a solid bet.

It may well be too little, too late for the Cowboys to win the NFC East, but they have at least given themselves a chance. Washington may well eliminate them Sunday with a win against Carolina, but at least the Cowboys will do their part to make that result a necessity.