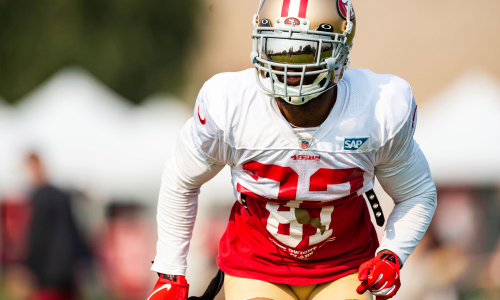 Both of these teams have been decimated by injuries this season. There are some of those listed below, but I could have easily gone 10 deep with relevant notes for each team. In fact, that was pretty much the entire narrative ahead of the 49ers-Giants game last week. Then, when game time rolled around, all San Francisco did was blast them 36-9 on the road.

Philadelphia played to a tie against Cincinnati last week. That is just not a good look for a team that was looking to return to the playoffs. The playoffs seem like a total impossibility right now, but they are really just one game out of first in the so-far weak NFC East. A road win here and they could be right back on track. Injuries are at the core of their challenges, but at times they have also just been bad.

QB Jimmy Garoppolo – Out – Mullens replaced him very capably last week, and this might not be that big of a loss.

This number has moved a lot. It was released at 49ers -3.5 and has jumped up to -7. That is a big leap and to a key number too. I suppose the market is just giving up on Philadelphia, while San Francisco showed their depth last week, beating a bad Giants team. That result was sort of impressive, but that Giants team is really bad while San Francisco, though decimated by injury, is coming off of a Super Bowl appearance. They know what they are doing while the Giants have a rookie head coach, so I am not sure you want to make any grand assessments based on what teams do against the G-Men.

I am leaning towards Philly because they can’t be this bad, can they? I am not a Carson Wentz guy, but he has to be better and the 49ers are still missing a ton on defense. As long as this number stays at 7, the Eagles are the play.

What we know about Philadelphia has not been very encouraging this season. We know they are banged up all over the field and we know their quarterback has to play better. On the latter, we know that the San Francisco pass rush is not what is was a year ago. Wentz may not have elite targets to throw to but if you give him time, he has shown he can have some success. For the NFL, I rarely back a dog against the spread that I can’t also see winning the game outright. Not predicting the upset, but Philly could get it done. There is no value on SF at this price.

This is the exact total of Philly’s last game, a 23-23 tie against the Bengals. Both of these teams are 2-1 O/U this season but it is hard to expect fireworks offensively in this one unless there are lots of turnovers. For both teams, their best receivers are tight ends and they are more about methodical drives than explosive plays. That is going to make it tough to get the over, as both would love to get the lead and then run out the game.