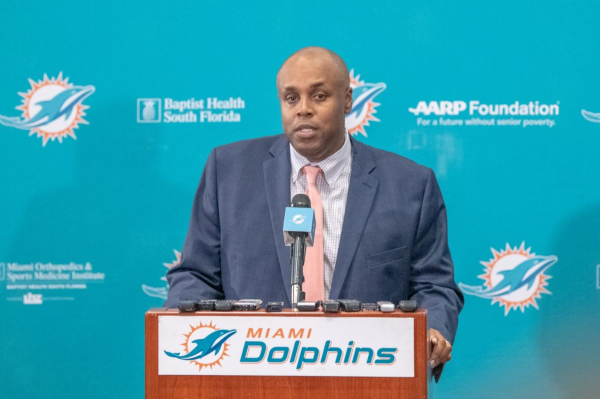 After years of mediocrity, the Miami Dolphins and their fans can look to the NFL Draft as a beacon of hope for a prosperous future. Miami owns 14 picks in this year’s draft, three of which are currently scheduled for Thursday’s first round.

With the amount of draft capital being wielded by Miami, the Dolphins aren’t just the league’s most intriguing team for the sport’s biggest offseason event — they’re also the most dangerous.

Throughout the history of the NFL, we’ve seen dynasties built through a spike in draft picks. For example, after trading star running back Herschel Walker for a plethora of picks, the Dallas Cowboys were nearly unstoppable throughout the 1990s.

Now, the Dolphins have their chance to build a team in their vision.

That prospect isn’t lost on Miami general manager Chris Grier, who’s under a lot of pressure to hit on talent this week. “If we build it right, with the right picks and smart picks and do it the right way, we have a chance to have a good team here for a long time,” Grier said.

While we can look to the prospect of a future dynasty in Miami, we should also expect the Dolphins to be very good very soon. Only six teams in the common draft era have owned as many picks as the Dolphins do (five) within the first 56 picks of the draft. Combined, those teams are 62-22-1 in the following season.

The Dolphins own three first-round picks — Nos. 5, 18, and 26 — and two second-round picks — Nos. 39 and 56. That sort of ammo gives Miami the ability to draft just about any quarterback they so choose apart from LSU’s Joe Burrow, who’s a -100000 favorite to go first overall to Cincinnati.

With the fifth overall pick, Miami is in a great position to have its pick of Alabama’s Tua Tagovailoa and Oregon’s Justin Herbert. The over/under on draft position for both players is currently set at 5.5.

While Tua has the talent and record of winning, Herbert is the more prototypical NFL quarterback based on size and arm strength.

Or will the Dolphins consider waiting for Utah State’s Jordan Love, whose over/under is set at 19.5, just after their 18th overall selection?

There’s also the potential for one of the top QBs to be stolen out from under Miami’s nose, especially after hearing that teams like Washington, which owns the No. 2 pick in the draft, is shopping its first-round selection.

No matter what, the Dolphins should come away with who they believe to be their next franchise quarterback on Thursday.

How Dolphins Should Use Their First Five Picks

If Miami hits on the majority of their selections, they should be able to walk away from this year’s draft with the core of their team for the next decade. Much of that prospect depends on how well the Dolphins draft in the first two rounds.

So, how should Miami use those first five picks?

With No. 5 overall, the Dolphins need to get their QB. With Burrow off the board, it’s time for Miami to choose their favorite between Tua and Herbert and go for it. They can also fill out the quarterback room with another selection at that position later in the draft.

The focus of the next four picks should be protecting that franchise quarterback.

Offensive tackle appears to be a strength of this year’s draft, which fits perfectly for a Miami team that allowed 58 sacks (most in the NFL) a season ago.

The over/under set for the number of offensive linemen to be drafted in the first round is currently set at 6.5. Miami must come away with at least one of those top-tier linemen on Thursday, and perhaps another on Friday.

So, the Dolphins should take a QB and a pair of offensive linemen with three of their first five picks. What about the other two?

Miami could opt to complete their defensive secondary with a safety selection in the second round, as well as finding a playmaker at the running back position, such as Ohio State’s J.K. Dobbins.

No matter how Miami uses its first five picks, they should feel great about the future once all 14 selections are made.