Do Back-To-Back Losses Mean The Patriots Are In Trouble? 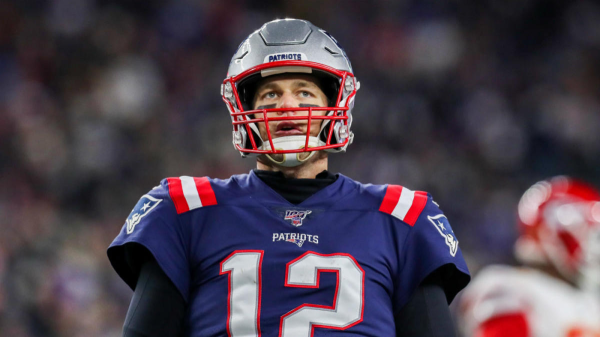 It’s not often that Bill Belichick and the New England Patriots drop back-to-back games, but that’s exactly what has happened after the Kansas City Chiefs held off a late rally to get the better of their AFC rivals in a 23-16 contest on Sunday.

Quarterback Tom Brady looked particularly underwhelming in the loss, completing just 19 of his 36 passes for 169 yards with one touchdown and one interception.

The most important incompletion of the game came on a 4th-and-3 from Kansas City’s five-yard line with just over a minute left in the game. Brady took the shotgun snap and targeted his most reliable receiver, Julian Edelman, but the pass to Edelman was broken up by Bashaud Breeland in the end zone.

The Chiefs took over on downs and ran out the clock to upset the Patriots and hand them their first defeat in Foxborough this season.

The 10-3 Patriots have now lost two in a row and three of their past five games, with all three defeats coming against potential playoff opponents – Baltimore, Houston, and Kansas City.

So, is New England finally in danger of losing its grip on the AFC, or will Brady and the Patriots be able to flip a switch when they need it most?

Beginning Of The End In New England?

So, are the Patriots in trouble? Well, that depends.

If we’re asking whether or not New England is in danger of missing the playoffs, the answer is no.

Although the Patriots are currently only one game ahead in the AFC East standings of the 9-4 Buffalo Bills, who fell to the Ravens this weekend, New England faces one of the easier remaining schedules and is a virtual lock to reach the postseason.

Even if Buffalo manages a Week 16 victory over New England, the Patriots face Cincinnati and Miami in two of the final three weeks of the season, meaning they have a straight shot to the AFC East title or a Wild Card spot, should they need it.

However, the Patriots are very much in danger of losing their long-time stranglehold on the AFC.

At 10-3, New England is already trailing 11-2 Baltimore for the top spot in the conference. And after falling to 9-4 Kansas City, the Patriots will lose out on a bye week in the playoffs if they let either the Chiefs or Bills chase them down.

For now, home-field advantage throughout the playoffs looks like a longshot with Baltimore facing the Jets, Browns, and Steelers down the stretch, so the Patriots should be focused on retaining the second seed.

Perhaps the scarier part for New England is that it has fallen to three of the other top four teams in the conference. So, to make it back to the Super Bowl, the Patriots will likely need to get through two of the teams they’ve already lost to this year come playoff time.

Patriots Falling Behind In AFC

Although we’ve heard the tale of Brady and the Patriots finally falling off a cliff before, only to be proven wrong time and time again, there’s no denying that this year’s New England team is struggling to find its dominance.

And when it comes to odds of winning the AFC, New England’s vulnerability is starting to show.

Despite looking like the best team in the NFL for a large part of the season, New England is allowing Baltimore to get further ahead while the likes of Kansas City is gaining ground.

To win the AFC, Baltimore is the favorite with odds of -110. Although the Chiefs just took down the Patriots, they’re still third in the conference with odds of +480. Currently sitting between those two teams is New England at +260.

So, while there’s a good chance we finally see New England run into an obstacle that it can’t overcome in the postseason, Brady and the Patriots are still very much in the thick of the race.