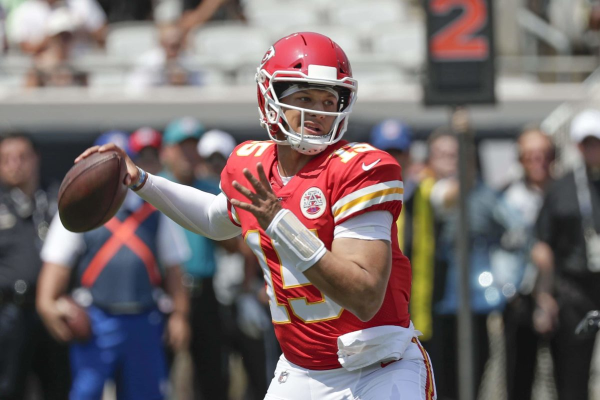 The week of the backup quarterback is upon us, and that means there are a lot of decision points to be made this weekend with so many question marks surrounding a lot of teams on the slate. There is also just a lot of game theory that goes into deciding whether to take a big-name QB or ride with the much cheaper backups.

For me, there are two tiers on this QB slate and those are as follows; The Elite and the Backups.

There are a few other quarterbacks that are viable, and I will call them “The Loose Cannons.” That group consists of Josh Allen, Kyler Murray, and Jameis Winston. We never know what to expect from these guys, but they are in great spots to rack up fantasy points.

From the elite group, I want Mahomes because I know that I am going to get elite production, and we have basically never seen him struggle to produce a good fantasy game. He is as consistent as they come, and he has elite upside in any matchup.

If you want to be a bit riskier than most, we can talk about Kyle Allen at minimum price on most sites. Allen is working with an elite group of playmakers like Christian McCaffrey and Curtis Samuel that have produced well with Cam Newton struggling for the last nine months. I think Allen will be able to run this offense at a high level.

This is a week where I really like spending up for players like Ezekiel Elliott and McCaffrey. McCaffrey should see even more of the workload with Cam out, and I think that the Cardinals will eventually be seen as one of the worst defenses in the league, especially when it comes to total yards. For Zeke, he is basically guaranteed a touchdown against the historically awful Miami Dolphins.

If you want to pay up for one but can’t afford two, I love Austin Ekeler in this offense. The Chargers need him to be an all-purpose back more than ever without multiple offensive starters suiting up for the third straight week. I expect Ekeler to continue to produce at a high level moving forward.

If you need to spend down, sprinkling in Devonta Freeman in a buy-low spot is not a bad option in GPPs. Freeman has struggled to move the ball at all this season, but he still could see six targets and 17 carries in his game if he can get into a rhythm.

My favorite play of the week is Samuel, and it’s not that close. I have been all aboard the Samuel hype train this offseason due to his elite explosiveness, but he has not gotten going yet. Why? His quarterback isn’t capable of throwing him the ball.

Now Samuel, who flashed at training camp where receivers are thrown to by every QB on the roster, gets Allen, and I think this could be just what the doctor ordered. Samuel has been WIDE OPEN down the field in the first two games, and I expect him to connect on a deep ball or two in this spot.

If you want an expensive receiver, I want to go right back to the well on Sammy Watkins. Watkins saw 13 targets last game, and I will take that all day. The Ravens saw what happened last week with the Chiefs’ other targets, so they cannot just key in on Watkins. I expect Sammy to have a huge game on Sunday.

Mark Andrews is my favorite tight end on the slate due to his elite upside and safe floor at the price. Andrews has seen eight and nine targets, and he has been hyper-productive on these targets. While I don’t expect the efficiency to continue forever, this is a great spot, and I would be more than fine with five for 70 as a pretty conservative projection based on how he has been used so far.