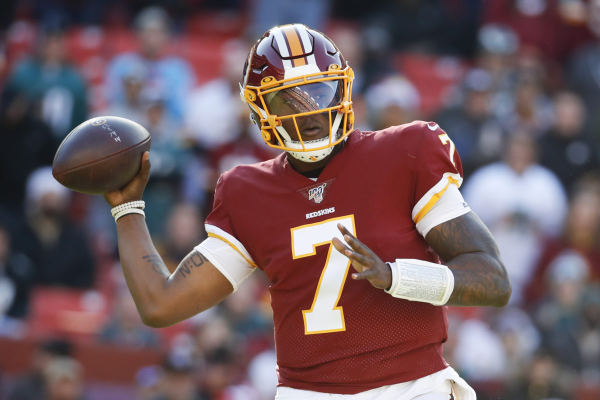 NFL DFS in Week 16 is really an open book right now with a lot of ways to go, particularly in GPPs. There are always plays that appear late and pick up steam, but I don’t see a ton of clear chalk options all over the slate, as most major injury situations are off of the main slate.

At quarterback this week, we can always just lean on Lamar Jackson, who has been Mr. Reliable this season. While the Ravens have been dominant this year, I don’t expect them to coast to the finish line and hold back for the playoffs because they already have a loss to division rival Cleveland this year. The Ravens need to beat the Browns here, and I think Lamar is a very safe play with a lot of upside.

I expect to see a few QBs pick up steam as cheap plays, and my favorite one is Washington’s Dwayne Haskins against the Giants. The Giants lost their best player in the secondary, and they were not good against the pass to begin with. The Redskins have looked competent recently, and Haskins is showing clear signs of improvement and comfortability within the offense each week.

I love plays like Christian McCaffrey and Chris Carson this week, but I do want to target a contrarian option at the top as well. I expect Ezekiel Elliott to see about 10 percent ownership across most sites, and I think that he is really interesting with the Dak Prescott injury situation.

There are multiple people saying that Dak hasn’t really thrown at practice and that late in the game last week, Dak really struggled to function at all. I think that this news will decrease Dak and the passing game’s ownership without bumping Zeke’s, especially because the Eagles are supposed to be much better against the run.

I expect Zeke to still be efficient here, and I think that a shoulder injury could lead towards a lot more dump-offs to a running back like Zeke in the passing game.

Julio Jones gets to play in a dome against a poor Jacksonville pass defense after seeing 20 targets last week. While I think that this target rate will not continue, it does make sense that he has seen an increase with the attrition that the Falcons have had at receiver this year. I love Julio in all formats.

Greg Ward is still too cheap on most sites for his expected targets and production in a must-win game. I expect the Eagles to trail in this game, and Ward’s production would theoretically coincide with Zeke dominating on the ground, which is nice in GPPs.

I don’t see how the Eagles do anything offensively beyond what they did last week because of their lack of options, so I think that Ward’s target projection is just very safe compared to most people in his price range.

I prefer to spend up at tight end this week due to the wide gap in expectations. I don’t really see any tight end beyond the top tier that I think has a clear path to more than five targets, and I don’t want to rely on a random touchdown on this slate due to the elite options up top.

I am still not a huge Zach Ertz guy due to his lack of explosiveness on a per-target basis, but the usage and opportunity in his situation have been undeniable recently, and I am more than happy to target the tight end that is likely favored over the rest of the field for targets this week.

I don’t mind playing Ertz and someone like Ward without Carson Wentz, as they are not expensive enough to really hurt each other’s production.

I also like Darren Waller, who has shown back up as a top option after the Raiders lost Hunter Renfrow a few weeks ago. Waller is a clear No. 2 on this slate for me, but he is still a great play. I think that I will be attacking both together in GPPs on sites that will allow me to play them both as a way to be very contrarian.