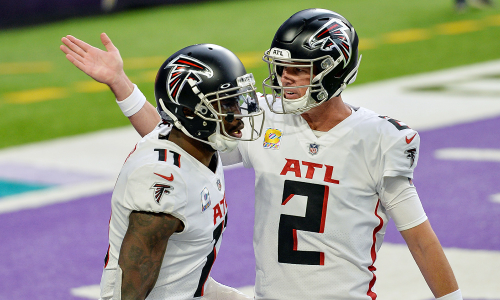 With a new head coach on the sidelines, Atlanta finally got their first win of the season last week. There is an extra playoff spot available in each conference this season, but it hardly seems like the Falcons are ready to go on a run.

Detroit has a couple of wins under its belt and both have come on the road. They will be looking to add to that as they try and stay relevant in the NFC as well. A win here gets them to .500

Atlanta won last week on the road. Now they will try and get their first home win of the season. They really took it to Minnesota last week in a complete effort. They scored 40 points by scoring 10 in each quarter and they did not give up any in the first half. That is an awesome formula, but it will be tough to repeat. A new coach might have helped a little, but the return of WR Julio Jones to rev up their passing attack was the real key.

Detroit also had an easy win last week, beating Jacksonville 34-16. Per the intro, both of their wins are on the road, with Jacksonville and Arizona the victims. The only thing those teams have in common is that those environments are hardly fearsome, with or without fans apparently. You have to consider the competition, but the Lions might have a new wrinkle to the offense with rookie RB D’Andre Swift. He rushed for 116 yards and might be their best back since Barry Sanders. If he can keep it up the offense, they can be really good.

These are two teams that consistently frustrate bettors. I am not totally surprised that Atlanta was made the favourite in this one because fading the Lions is a thing. However, the action has already pushed this one from -1 to -2.5 now and I can see it getting to the full three.

Atlanta has not covered a game at home this season and is still suspect on defense. Their offense is back to full strength though, and can be lethal. For what it is worth, both of Detroit’s wins, and covers, have come on the road this season. QB Matt Stafford is more than capable of keeping up with Matt Ryan, but he has not had the kind of season that most people thought would win him Comeback Player of the Year.

A running game might help him get going and perhaps this is a letdown spot for the Falcons off the win. This is a really hard handicap, not because the teams are so good, but because they come with so much baggage. A small home favourite is always a nice play though.

Even though I am leaning to Atlanta to cover (and win in the process) that team is way to Jekyll & Hyde to take them on the money line at this price. Detroit has played its best ball on the road this season and is more than capable of winning. Both teams have been prone to giving up large leads too. That is not a reason to take Detroit, but this money line play is much more of a fade than the Falcons anyway. Just don’t put it in your parlay, as it’s Definitely not a sure thing.

It is no surprise that both teams have played more overs than unders this season. Both teams have experienced quarterbacks and neither team is all that great on D. Putting those factors together it has been a surprise to see that the number has actually come down a little after opening at 56.5. The oddmakers have had a little trouble with Atlanta totals this season with games going either way over or under, as the smallest margin was the +9.5 point last week.

Meanwhile, Detroit games have been generally much closer to the number. If we are backing an Atlanta win and cover it feels much more likely that the game has lots of offense. Jones is back and I don’t see how the Lions shutdown the Falcons passing attack, win or lose. Detroit will move the ball, and a mistake or two likely keeps them from winning, but not from putting up points.