Denver Broncos vs. Kansas City Chiefs Preview: Can Anyone Stop the Champs? 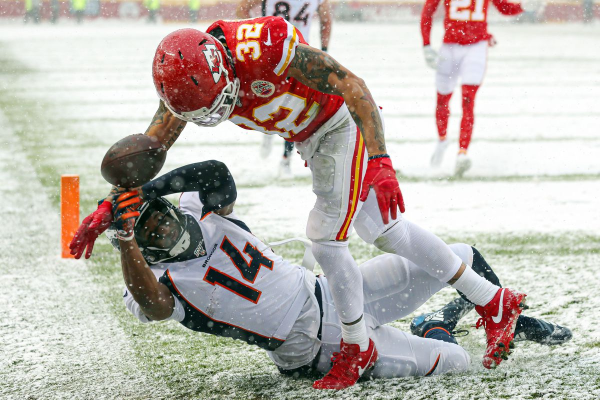 Repeating is never an easy task at the highest levels of any sport, but it will be a surprise to no one if the Kansas City Chiefs do it this season.

The only stumble thus far this season for the reigning champs was a Week 5 home loss to the Raiders. That loss is enough to keep them out of the AFC’s top spot for now with the Steelers at 11-0, but they have been stellar otherwise on the way to a 10-1 start.

On Sunday night, the Chiefs will look to win their seventh game in a row as they welcome AFC West rival Denver. The Broncos made headlines last week due to having to start wide receiver Kendall Hinton at quarterback, but at 4-7, there have not been many positive headlines this season.

Can they challenge the Chiefs, or will it be another big night for Patrick Mahomes and the champs?

Mahomes has never lost to the Broncos. He’s 6-0 in six career starts against Denver, and in those games, he has completed 69.2% of his passes for 1,507 yards, with nine touchdowns and three interceptions. Mahomes, the heavy MVP favorite, comes into this game on fire. In four November games, he completed 72.9% of his passes (132 of 181) for 1,598 yards and 14 touchdowns.

If the Chiefs have any flaws, they are on defense. In the last three games, they have surrendered 86 points. That said,, they are facing one of the league’s least productive offenses, as the Broncos average only 19 points per game. Only the winless Jets have been more inept.

Kansas City 1st half -7 (-120): The Chiefs got off to a fast start in the previous meeting, racing out to a 24-9 halftime lead on the way to a blowout win in Denver. Another fast start is in the cards.

Melvin Gordon over 53.5 rushing yards (-110): Gordon ran for 68 yards on 17 carries in the previous meeting. He has run for over 50 yards only once in five games since, but this is a sound bet. His best game in recent weeks was at Miami, who is one of the league’s poorer teams against the run. So is Kansas City.

Tyreek Hill to score anytime + Kansas City to win (-115): These odds are too good to pass up. Hill has scored at least one touchdown in five straight games and has reached the end zone in every game but Kansas City’s Week 6 win at Buffalo. Also, Hill has three multi-touchdown games in his last four games, which makes the +370 to score 2+ touchdowns also worth a look.

Double-digit spreads are always dangerous in the NFL. On paper, the Chiefs should blow the Broncos away. And they likely will. But avoid the spread in this one to avoid potential frustration in case the Chiefs do as they did last week at Tampa Bay and take their foot off of the gas late. The over, however, is a much better shout with how prolific the Chiefs have been on offense, but tread lightly.