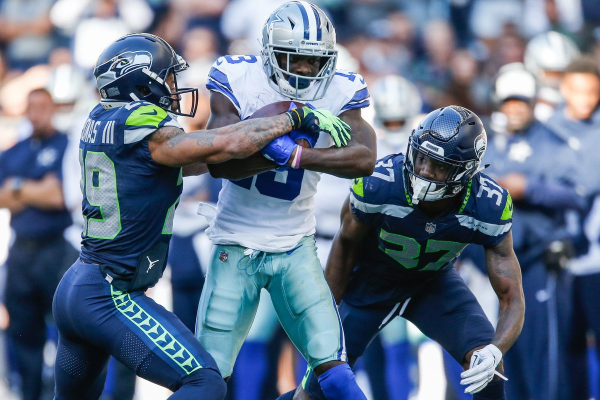 The late-afternoon game between the Dallas Cowboys (1-1) and Seattle Seahawks (2-0) features two NFC contenders tied for first in their respective divisions. Seattle will play host at Century Link field, where it is 16-1 in its last 17 September home games. Kickoff is slated for 4:25 pm ET.

At 2-0, Seattle is posting the second-best scoring offense in the league, averaging 36.5 points through two games, albeit against two uneven opponents. In week 1, the Seahawks topped a struggling Atlanta team 38-25, before stuffing New England late to hold onto a 35-30 win Sunday night.

Both wins featured prolific performances by quarterback Russell Wilson. With an 87.5 QBR (2nd in the league) and 9 TDs (1st), Wilson has emerged as the early-season favorite for MVP. He’s completed more than 75 percent of his passes in both games while being sacked five times and tossing one pick (against New England).

Dallas on the other hand has been far less consistent. After struggling to gain traction offensively in a 20-17 week 1 loss to the Rams, the Cowboys battled back from a 20-0 first-quarter deficit against Atlanta to steal the game 40-39. All it took was 450 passing yards fromDak Prescott,paired with 3 TDs on the ground and another in the air.

Despite Dallas’ success in the passing game, the defense has been equally suspect. The Cowboys are also in the bottom third of the league defensively, giving up 400 yards per game, including 133 rushing and more than 29 points per contest. With a new scheme, new defensive coordinator, several new pieces and a banged up secondary, it may be a long process to turn this defense around.

Fanduel and Draftkings have the Seahawks as a clear favorite at -5. Fanduel’s moneyline puts Seattle at -215 and Dallas at +180 while Draftkings has the Seahawks -220 and Cowboys +190. The two books vary slightly on the over/under for total points, with Fanduel putting the line at 55 points and Draftkings at 56. Seattle has hit the over 56 points in both games this season and Dallas has split, though 56 is normally a very high number.

After two weeks, Seattle gets the edge in scoring. The Seahawks have scored the second-most points in the NFL (73) behind only Green Bay, and have gotten into the end zone 10 times (1st). Dallas has scored 57 points, but even in its one win, has been pretty inconsistent.

Both offenses are stacked with talent on the outside. Seattle’s DK Metcalf has emerged as a big play threat with 2 TDs and a 96 yard average, including a monster 54 yard touchdown catch over Stefon GIlmore last week. Dallas’ Amari Cooper has already compiled 16 receptions (4th)and rookie CeeDee Lamb broke out for 106 yards on 6 receptions against Atlanta.

Defensively, neither team has shown much resistance. With both teams near the bottom part of the league in yards and points surrendered, expect a high scoring tilt. Dallas has a slight edge on pass rushing talent but Seattle will field the two best defenders in Bobby Wagner and Jamal Adams. Advantage Seattle.

Dallas will be without its top two defensive backs for this one. Anthony Brown has hit the IR with a rib injury and Chidobe Awuzie injured his hamstring against Atlanta. That leaves Jourdan Lewis, who returned last week from an ankle injury, and rookie Trevon Diggs at corner, though Diggs is dealing with a shoulder ailment as of Wednesday.

Dallas hopes to see Tyron Smith back on the field after missing last week with a stinger. La’el Collins will miss one more week on IR.

Seattle’s new-look secondary featuring Adams, Quinton Dunbar and Quandre Diggs hasn’t fared much better than Dallas. But Adams has proven to be a game-wrecking run stuffer that could close the gaps on Ezekiel Elliott and force Dallas to become one dimensional.

Seattle to win, But Dallas Covers

Frankly, 5 points is very generous in a game like this. Seattle has been a lock at home and Wilson is playing at an extremely high level, but the suspect play of the defense gives Dallas a chance to keep it close and cover. Still, Seattle took Matt Ryan’s best shot in week 1 and came out comfortably on top. Prescott, Elliott and the Cowboys will need big days to sneak out a win in Seattle.

I like Seattle to finish with the W, but don’t be surprised if Dallas covers in a close shootout that comes down to the last possession.

The easiest money here is hammering the over. Both defenses have been swiss cheese while both offenses have tons of firepower. Unless this becomes the Chris Carson and Ezekiel Elliott show, 56 points seems low.