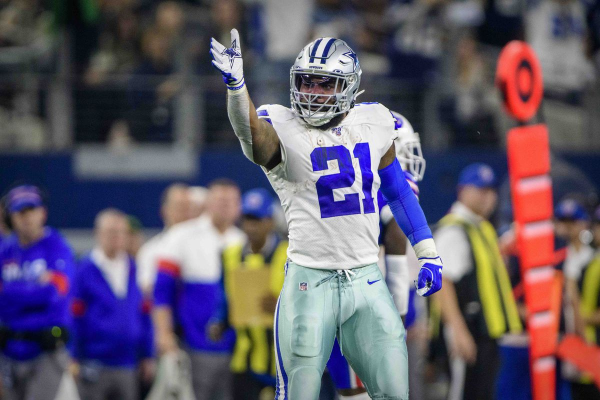 Primetime Sunday night features a matchup of two teams that underperformed in 2019 but have high expectations this season. On Sunday, the Dallas Cowboys will travel to SoFi Stadium to take on the Los Angeles Rams. Kickoff for this one is scheduled for 8:20 pm ET.

The Cowboys had all of the weapons last season but just couldn’t get the job done. When the dust settled, they were 8-8 and finished second in the NFC East. Led by Dak Prescott and Ezekiel Elliott, they will look to get out to a fast start this season.

For the Rams, it seemed like a case of a Super Bowl hangover last year. After losing in the Super Bowl in 2018, expectations were high last year. It becomes understandable why Rams fans were so disappointed when they finished 9-7, good for third in the NFC West.

According to Fanduel, the Cowboys come into this one as slight favorites, despite playing on the road. Their moneyline sits at -134 while the Rams come in at +116. The spread currently has the Rams at +2 while the over/under on total points scored is at 51.5.

Last season, both of these teams were top-10 in terms of scoring. The Cowboys came in 6th in the NFL, averaging 27.1 points per game, while the Rams ranked 10th averaging 24.6 per game.

On the defensive side, the Cowboys were the more consistent team last year. They ranked 9th overall in terms of points allowed at 20.1. The Rams ranked 17th overall, allowing an average of 22.8 points per game.

Cowboys Look To Show Last Year Was A Fluke

After such high expectations and significant disappointment, many are a little more reserved with their expectations of Dallas this year. That is, except the players on the Cowboys. They knew they underperformed and will look to right the ship this year.

No one would love to have a monster season more than Dak Prescott. Frustrated by an inability to get a contract extension worked out, he instead agreed to the franchise tag. This season, he will look to exceed expectations and levy that into a nice new contract.

Speaking of rushing, the Cowboys will look for another big year from star running back Ezekiel Elliott. In 16 games, he rushed 301 times for 1,357 yards and 12 scores. He also added 54 receptions for 420 yards and another two scores.

Rams Trying To Get Back To Super Bowl

Coming off of a Super Bowl appearance, Sean McVay and the Rams also had high expectations last season. Like the Cowboys, those expectations were certainly not fulfilled.

Before last season, the Rams signed quarterback Jared Goff to a big contract extension, and now he needs to live up to it. Last season he threw for 4,638 yards and 22 touchdowns, but he also threw 16 interceptions. The Rams hope that he can be a bit more consistent because he certainly has the talent around him for the Rams to have a solid offense.

On defense, the Rams will enjoy not only Aaron Donald, but a full year of Jalen Ramsey. Last season, Donald had 48 tackles, 12.5 sacks, and two forced fumbles. The 12.5 sacks were a far cry from the 20.5 he had in 2018, but that was still a solid number to put up.

After being acquired from the Jacksonville Jaguars last season, Jalen Ramsey agreed to a contract extension with the Rams to keep him in L.A. Last year, between both the Jaguars and Rams, he played in 12 games amassing 50 tackles, two forced fumbles, and one interception.

Taking The Cowboys To Win And Cover

While the Rams defense is legit, I continue to be impressed with the offensive firepower that the Cowboys have. Between Dak Prescott, Ezekiel Elliott, Amari Cooper, Michael Gallup, and the steal of the draft, CeeDee Lamb, the Cowboys should be able to put up a lot of points this season.

Throw on top of that the fact their defense isn’t half bad either, and I think this is a game where they will come out to try to prove a point about this season. For my money, I am taking the Cowboys to win and cover the 2-point spread.

After extending their hot and San Diego’s cold streak, the Seattle Mariners will be looking to leave Petco Park with a two-game sweep as they take on the Padres this afternoon. Yesterday, the Mariners pounded out a dozen hits and plated eight runs, and Chris Flexen pitched 6.2 shutout innings to collect his third straight END_OF_DOCUMENT_TOKEN_TO_BE_REPLACED