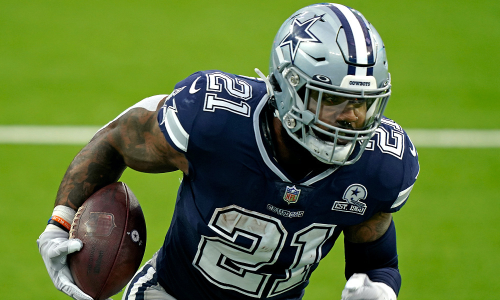 The Dallas Cowboys (2-4) visit the Washington Football Team (1-5) in a game that pits two NFC stragglers at FedExField on Sunday. Both teams will be seeking to get over their week 6 losses and turn around their seasons.

The Cowboys lead a woeful NFC East division with two wins. Another win for the Cowboys will see them consolidate their lead while a loss will see Washington tie their Sunday opponents for the division’s top spot.

Sportsbooks favor neither of these struggling sides with both sides being held at -110 to win by FanDuel and DraftKings. A $110 bet for either Washington or the Cowboys will see you get a $100 return depending on who wins the game.

The match is expected to be a close affair, with Cowboys +1 and Washington -1 are being offered at FanDuel at -115 and -110 respectively.

The game totals for the over/under bet have been placed on the 45 points mark for this matchup. On this one, the DraftKings are offering both the over and under at -110.

The Cowboys go into Sunday’s game having lost three in their last 4. In their last game, a blowout loss to the Arizona Cardinals, they struggled without the services of Dak Prescott at quarterback.

His stand-in Andy Dalton performed poorly on Monday. He made 34 of his 54 passes for 266 yards, but had two interceptions. It would have been worse though, as the Cardinals did not capitalize on some of his other bad throws.

Ezekiel Elliott, the Cowboys’ top running back, also had a tough game on Monday. His two fumbles in the first quarter buried the Cowboys in a 21-0 hole that they couldn’t recover from.

Going into Sunday’s game, the Cowboy’s leaky defense needs some mending if they are to keep up with Washington. In the first 6 games, they have allowed 218 points (an NFL record) while also allowing more than 34 points a game (5th worst in NFL history).

Their offense is faring not much better recently, as their turnover numbers (15) and turnover margin (-12) rank last in the NHL this season. The Cowboys’ opponents have also been capitalizing on their turnovers, scoring 84 points off of them

Dallas is also depleted and are having to work with a patchwork of a lineup. Prescott is of course out and so are La’el Collins and Tyron Smith, both starting tackles. They will also be missing their All-Pro right guard Zack Martin, who suffered a concussion last game. This leaves the Cowboys offense pretty thin going into Sunday’s matchup.

On the positive side, with the personnel at their disposal, maybe Sunday presents an opportunity for them to tweak both their offensive and defensive approach and get some winning momentum going forward.

The Washington Football Team opened the season with a surprise 27-17 win against the Eagles at home. They proceeded to drop the next 5 and are 1-6 for the season.

They come into this one on the back of a painful 20-19 loss to the New York Giants, an unfortunate defeat that was sealed when they failed at two-point conversion in the game’s waning seconds. They will be relishing the chance of putting an end to their 5-game skid when they face the Cowboys at home this Sunday.

Washington has been surprisingly decent, but their slow starts have been a major contributor to their many loses this season. In the first half of games this season, they have been outscored 108-44 and outgained 521-339 yards. It was no different in their last game out as they were already trailing 10-0 early in the second quarter Vs the Giants. They will need to turn around this trend if they are to stand a chance against the Cowboys.

This season, Washington is averaging 18 points per game going into game week 7. They are also allowing the opposition to score 27 points and 337 yards per game for the season. While not scoring in volume, Washington’s offense has been moderately effective with Kyle Allen under center.

Back Washington to win it

It is strange that the Cowboys still lead the NFC East despite having a losing record going into game week 7. The Cowboys defense has been in shambles and are on pace to give up over 581 points (the record) this season. Dallas has more talent going into Sunday’s match, but the team has been ravaged by injuries on both sides of the ball

While Washington is not a finished product, their defense has been undoubtedly better. Their offense has also shown flashes of promise in the past games and if they are able to sustain it against a bad Cowboys’ D, they should snatch a win at the FedExField. I like the home team here. Another interesting bet could be a double result where Washington loses the first half (they’ve been bad early in games) but ends up winning the game.