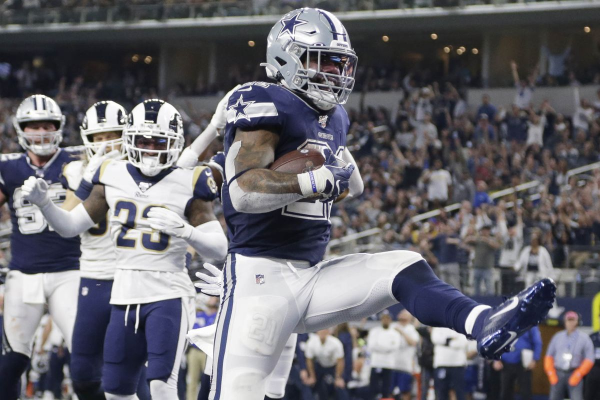 After the Philadelphia Eagles won earlier in the day, the Dallas Cowboys were looking up at another team in the NFC East for the first time in months. Yet when the Cowboys welcomed the Los Angeles Rams to town, the coin toss was just about the only thing that went wrong for Jerry Jones’ team.

Dallas needed the NFL to step in to save it from having to kick off in both halves after a miscommunication between Dak Prescott and referee Walt Anderson during the coin toss. Well, the Cowboys would end up kicking off plenty of times, anyway.

Prescott and company would jump out to a 28-7 lead in the first half and never look back.

On a day when tight end Jason Witten and linebacker Sean Lee appeared to turn back the hands of time, the Cowboys earned their first victory over a team with a winning record this season. For a cherry on top of the cake, new kicker Kai Forbath went 3-for-3 on his field-goal attempts.

Prescott would end the contest 15 of 23 for 212 yards and two touchdowns. One of those scores was a beautiful one-handed catch by Witten, and the other came by way of a 59-yard strike to Tavon Austin.

Both Cowboys running backs would top 100 yards, as Ezekiel Elliot rushed for two touchdowns, and Tony Pollard added another.

Defensively, Dallas didn’t let up until the fourth quarter. After stuffing the run time and time again, the Cowboys’ defense was led by Lee, who picked off Jared Goff and then sacked the Rams QB to keep momentum with Jones’ team.

With the win, Dallas improved to 7-7 and set up the showdown we’ve all been waiting for.

It was all going so poorly for the Cowboys. Sliding on a three-game losing streak, Dallas had scored just 48 combined points against the Patriots, Bills, and Bears.

A 44-point performance against the Rams has put it all behind them, and now the Cowboys have a chance to book their ticket to the postseason with a win this upcoming Sunday afternoon.

While eight teams have already earned a playoff berth, the NFC East is still up for grabs. Both the 7-7 Eagles and the 7-7 Cowboys still control their own respective destinies.

Thanks to its 4-0 division record and a head-to-head win over Philadelphia earlier in the year, Dallas can earn the NFC’s fourth playoff seed with a week to spare if it can go into Lincoln Financial and take down the Eagles.

Philadelphia will represent the division in the postseason if it wins out, with only a contest against the Giants remaining on the schedule after this week’s clash with the Cowboys.

The Eagles have built up some momentum with a pair of come-from-behind victories over other NFC East rivals, but the Cowboys will have plenty of confidence after thrashing the Rams and having already defeated Philadelphia in a 37-10 contest in October.

Who Takes the Division Crown?

It all comes down to this. Once again, the NFC East will be decided in the final weeks of the season when the Eagles and Cowboys go head to head.

Will the recent Super Bowl champs rise up and defend their home field, or will Jason Garrett’s Cowboys silence all the noise and earn another trip to the playoffs?

According to the odds, it’s going to be a close fight.

Going into Philadelphia, the visiting Cowboys are currently 2.5-point favorites in this Sunday’s matchup that could decide the NFC East.

While Philly would still have some work to do to earn the division title even after a win over Dallas, the Cowboys only have to get a win this Sunday to earn a playoff berth after getting a big home win over the Rams.

Because of that fact, the Cowboys are favorites to win the NFC East with odds of -155. Philly is far from a longshot, however, with odds of +125.

All eyes will be on Philadelphia this weekend with the Cowboys coming to town.